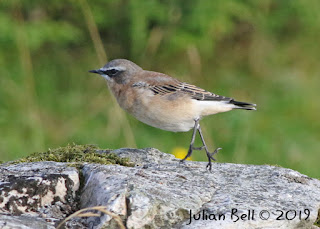 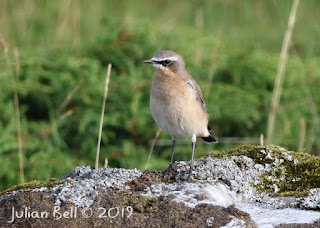 My usual stroll at Herdlevær produced some migrants on 04 August with my first Knot polarsnipe of the autumn heading south with Oystercatchers tjeld. A Spotted Flycatcher gråfluesnapper was the first I have seen there this year too. Other migrants included a couple of Greenshank gluttsnipe, a skein of southbound Greylags grågås (good timing at the hunting season started the same day!).

Back home at Nautnes a Peregrine vandrefalk flew over the garden.

I spent much of 05 August out fishing but had a Grey-headed Woodpecker gråspett from the garden and a Green Sandpiper skogsnipe at Hatten among other things. Lots of terns about with decent flocks of both Common Tern makrellterne and Arctic Terns rødnebbterne, with quite a few fledged young of both species - a good tern year at last!
Posted by Jules at 8:30 pm