On 10 February I ate my lunch at Herdlevær but things were rather quiet with just 10 Gannets havsule and several Kittiwake krykkje heading north.

On the way home three Greylags grågås were at Tjeldstø - these may be new arrivals but equally could be from birds overwintering on the other side of the fjord as later on I saw them heading across the fjord in the direction of Herdla.

A Woodcock rugde was a welcome sight at Sture - these birds must be enjoying the best winter ever with plenty of moist earth to probe for food.

Back home five White-tailed Eagles havørn were hanging in the wind.

Work took care of 11 February but a male Sparrowhawk spurvehauk perched next to the feeder as I left the house. 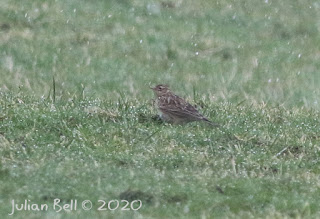 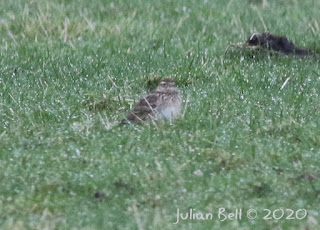 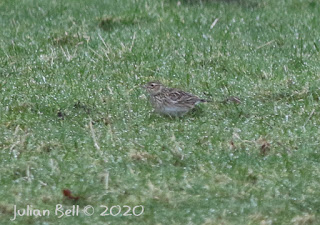 On 12 February I briefly covered a few localities seeing a nice flock of 60 Brambling bjørkefink and a Jay nøtteskrike among the usual stuff. A tip off led me to seeing the first Skylark sanglerke of the year at Skjold🙂
Posted by Jules at 11:03 pm