Another day of not really being out. Computer time is just increasing, despite (or because of) the lack of work. 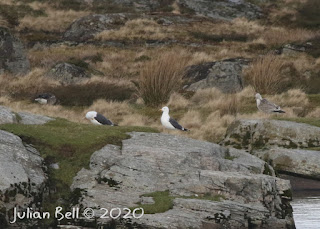 Two LBBG sildemåke at Husvatnet, Tjeldstø were the first proper returning individuals of the year - my previous record this year was a freak winter occurrence. 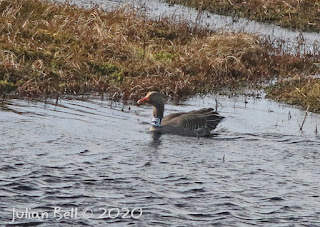 UN7 - another neck ringed Greylag grågås among the returning birds.

I have yet to connect with "Veejay" (Greylag VJ3) myself although he has been seen in the area. Today I managed to read two neck rings despite not even having my scope with me. One of them was UK3 which turned up earlier, the other was a new bird - UN7. This too was ringed at Kårstø, presumably during moult, last summer before being seen in northern Germany in early November.
Posted by Jules at 10:14 pm