Moved east to avoid too many birds:) A flock of Bearded Tits skjeggmeis were found back home the day after I left just to rub it in. The first record for Øygarden and the second for the county.

And to further ensure few birds were seen I  almost didn't go out either, though I managed a couple of afternoon visits to Gressholm right outside Oslo city centre.

On 07 October there were masses of Fieldfare gråtrost and few of the migrants I've been seeing on the west coast - so it looks like things are at least a couple of weeks ahead here.

The only birds of any interest were a flyover Common Buzzard musvåk which landed on the island to the south of Gressholmen and a Peregerine vandrefalk heading over towards the city centre. A couple of Chiff-chaff gransanger were the only other migrants present. 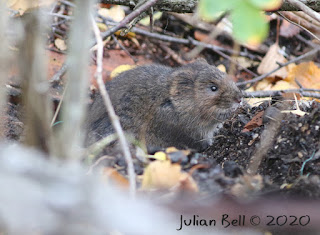 Water Vole vånd - the island of Gressholm is FULL of these right now.

There are obviously enormous numbers of rodents - the ground was full of burrows and we saw at least some of the culprits - Water Voles vånd. This should mean a promising season for raptors and owls. 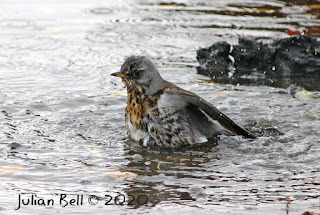 The only other thing of remote interest was that the Fieldfare gråtrost were bathing and washing themselves in large numbers in seawater. I don't think I have seen this before....

Another visit on 09 October produced nothing, almost literally. I've seen more in the middle of winter there.

A Red-flanked Bluetail blåstjert was found at Fornebu on 08 October showing that with luck and perservation even the east of Norway can produce some rarities!!