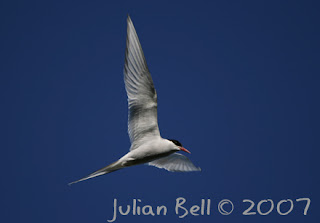 Arctic Tern rødnebbterne
Nothing special about, just a White-tailed Eagle havørn and most of the usual species.
Posted by Jules at 9:20 pm 0 comments 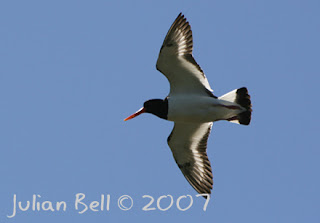 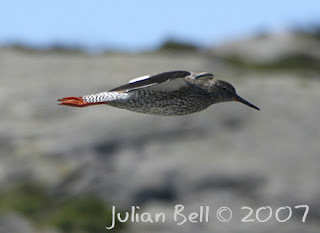 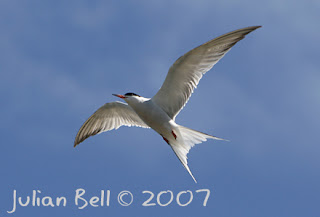 Common Tern makrellterne
Not out birding as such, and then only in the heat of the day. Correspondingly little to be seen, just the usual local breeders. Common Tern makrellterne has recently been added to the Red Data List for Norway due to concerns over declining populations. Thankfully it seems there are still some around in Øygarden.
The local White-tailed Eagle havørn have, as usual at this time of year, become unpredictable. However, an adult flew over causing panic and concern among the gulls.
Yesterday a sinensis Great Cormorant mellomskarv rested beside Husvatnet, Tjeldstø. This scarce visitor to Hordaland seems to be becoming more regular. A guide to identification of this race can be found here.
Posted by Jules at 4:40 pm 0 comments

Kick started the day at 03:00 with singing Spotted Crake myrrikse at Tjeldstø again.

Seawatching at Skogsøy, typically for the time of year, produced quality rather than quantity - with highlights including one each of Arctic tyvjo, Great storjo and Pomarine Skuas polarjo. In an Øygarden contex a flock of five Pinkfeet kortnebbgås were the best birds. Especially good in that I was guiding and trying to show off the area! Otherwise small numbers of Red-throated Diver smålom, Velvet Scoter sjøorre, Northern Fulmar havhest (VERY close in despite next to no wind) and the usual suspects

After Øygarden it was off to the Hardangervidda......WOW!
Posted by Jules at 11:02 am 0 comments

Having been housebound working on a report all week which I finally sent it off at 01:00; taking a cold beer out on my terrace the sound of the can opening coincided with the calling of a Spotted Crake myrikse! This too was a new species for Øygarden, the second this week. However, the nature reserve at Tjeldstø is a perfect place for the species so it wasn't totally unexpected.

It sang for at least an hour, easily audible from the cycle path by the main road (or my house!). Typically it threw its voice all over the place, sometimes sounding as if it was at my feet, at other times distant. I even began to wonder if there were two...

Other sightings during this time included roding Woodcock rugde and a few deer.
Posted by Jules at 9:37 am 0 comments 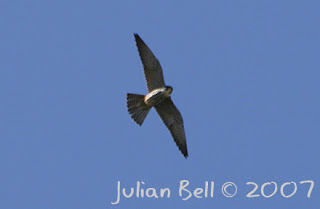 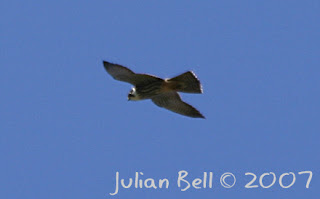 Having been stuck in the house with work the last few days I finally took a quick stroll through the reserve and was rewarded with a first for Øygarden - a Hobby lerkefalk! Wicked! Unfortunately the only pictures I managed were a few record shots.
Other birds of note have been few and far between but a Collared Dove tyrkedue flew over my garden yesterday and an Arctic Skua tyvjo did the same on Saturday afternoon.
Posted by Jules at 5:52 pm 1 comments

A short spell at Skogsøy gave good results, despite almost windless conditions. Well over 300 Brent Geese ringgås headed north, with the first seen over land not long after 05:00. Most of these were in a single flock of at least 250 a little after 10:00.
Other birds on their way north included well over 30 Red-throated Diver smålom, four Arctic Skua tyvjo and 10 Velvet Scoter sjøorre. Around 130 Common Scoter svartand headed south.
At Tjeldstø at least one of the Curlew storspove pairs hatched three young.... 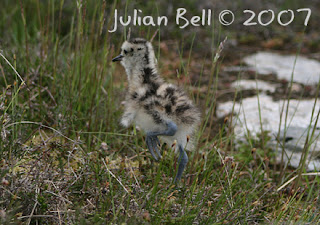 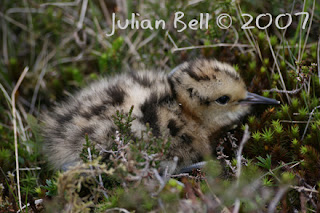 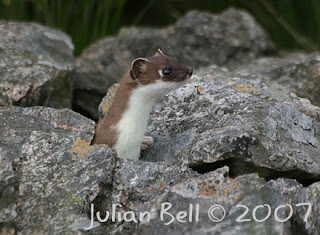 Weasel on the prowl...
Not birding at all but White-tailed Eagle havørn, two Common Sandpiper strandsnipe and most of the usual seen. Highlight was a Weasel giving good views as it hunted through a pile of stones.
At Tjeldstø a Swift tårnseiler was the first of the year.
Posted by Jules at 7:58 pm 0 comments