Today was never going to match yesterday and despite a thorough check at Tjeldstø nothing much of note was to be found. Small numbers of the usual migrants moving through or setting up territories - now a couple of singing Song Thrush måltrost present, a small flock of Fieldfare gråtrost dropped in, new Meadow Pipits heipiplerke continue to arrive and Siskin grønnsisik numbers at the feeder increased - the latter mirroring the situation in the Shetlands.

The first Lesser Black-backed Gull sildemåke I have seen this year also turned up, the first for Øygarden were reported about a week ago.

Hordaland's keenest twitcher predictably made the trip out and relocated the Gadwall snadderand pair on Husvatnet at Alvheim (rather than the lake of the same name at Tjeldstø). This tied in very well with the direction the birds disappeared in yesterday.

Evening update:
It seems that the Gadwall pair are shuttling between Rotevatnet at Tjeldstø and Husvatnet at Alvheim as they were seen on Rotevatnet yesterday evening. They must have moved back to Alvheim during the night. Obviously anyone trying for these birds should check both localities. 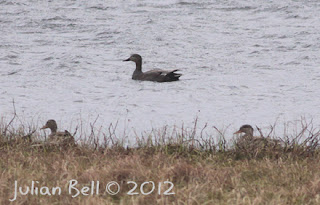 Male and female Gadwall snadderand - male centre and female on right hand side. Mallard stokkand on the left. 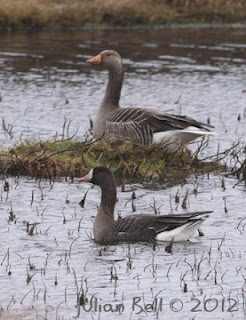 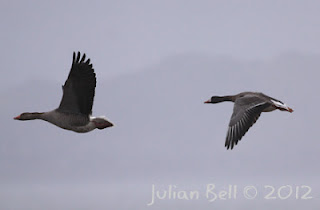 After being stuck inside all week I finally got a breath of fresh air. The  walk around the reserve exceeded all expectations with a pair of Gadwall snadderand on Rotevatnet being the highlight - finally unblocking one of my Øygarden bogey birds. The male was easy to spot but I only saw the female in photographs at first and returned for a better look - it was then that the birds took off at long range but looked that they may not have gone far. Gadwall are something of a rarity with up to a several years between records (though I missed the previous one last November).

Shortly the first Whitefront tundragås of the year put in an appearance - a rare March sighting for the area.

Other birds included a sinensis Cormorant mellomskarv on Husvatnet.
Posted by Jules at 2:21 pm 0 comments

For the third day in a row work commitments prevented any time out of the house.

However, I couldn't help noticing the first Siskin grønnsisik I've seen this year in the garden. This winter has been unusual with none of the usual winter finches turning up.

Sunflower seed consumption has gone through the roof the last week or so - almost 3kg a day as the Greenfinches grønnfink prepare for the breeding season.
Posted by Jules at 8:22 pm 0 comments

Email ThisBlogThis!Share to TwitterShare to FacebookShare to Pinterest
Labels: Siskin

Dullish and barely a breath of wind.

A hunting Peregrine vandrefalk also put in a brief appearance.

New for the year were a Song Thrush måltrost and a fly over alba wagtail linerle.

Yesterday's Black Redstart svartrødstjert was thoroughly looked for but not refound.

The day started off even better than anticipated with the first rarity of the spring - a Black Redstart svartrødstjert. It looked more like a female than an adult male but sang repeatedly - not sure whats going on there.

A fly over Lapland Longspur lappspurv which called repeatedly was rather earlier than usual and would appear to be the first March record for Øygarden! Other migrants included a small flock of Meadow Pipits heipiplerke, Golden Plover heilo, Skylark sanglerke and the first Reed Bunting sivspurv of the year.

A very brief look at the sea showed that although there was some migration (Oystercatcher tjeld, Common Gull fiskemåke and Red-throated Diver smålom) the passage was much reduced compared to yesterday. 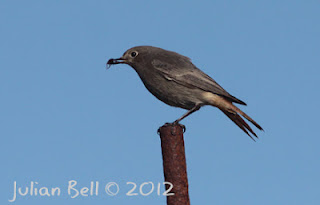 This Black Redstart svartrødstjert was obviously having a good day at Herdlevær - so much so that it sang repeatedly. 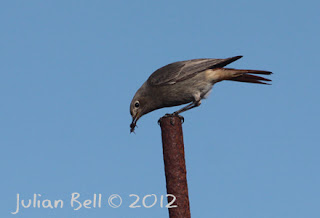 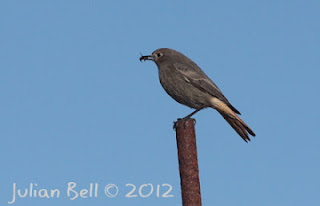 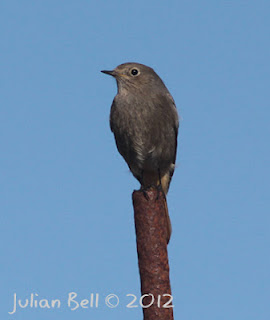 On the way back to the car I found the best rarity garden in Øygarden (and probably the county of Hordaland) in a rather different state than usual. The trees are being heavily cut back and / or removed and another house will be built there. This is surely the end of this gardens magical rarity pulling power. This garden has had Isabelline Shrike rødhalevarsler, Blyth's Reed Warbler busksanger and much, much more besides - perhaps the old "bombehagen" at Herdlevær will take over the title of best rarity garden in Øygarden? 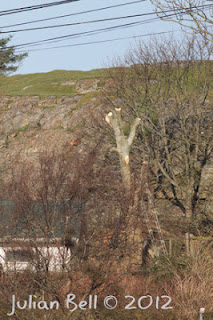 Beginning of the end for the best rarity garden in Øygarden?


We can but hope that the new house also gets a productive garden.....but this will no doubt take at least a few years.

Highlight was a good passage of Oystercatcher tjeld with over 1200 heading north, also almost 650 Common Gull fiskemåke, an adult Iceland Gull grønlandsmåke, 30 Black-headed Gulls hettemåke and most of the usual suspects - well over 2000 birds in all. 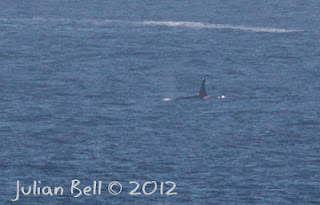 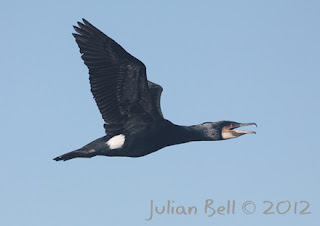 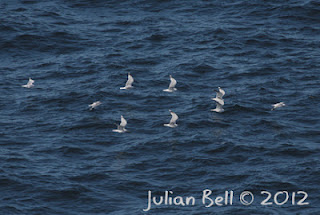 A constant passage of Common Gulls fiskemåke continued throughout the morning 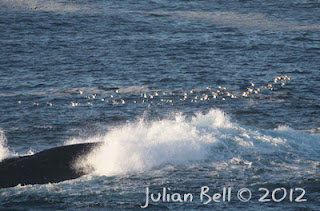 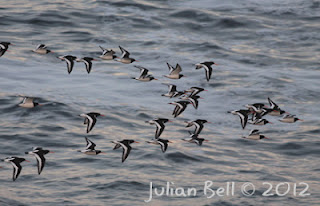 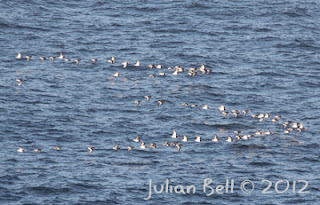 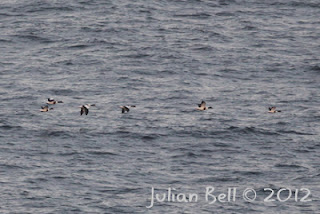 Virtually the first birds of the morning - Shelduck gravand

An added bonus was a pod of Orcas spekkhogger well offshore.
Posted by Jules at 9:22 pm 0 comments

A quick stroll at Tjeldstø produced a variety of displaying waders - Lapwing vipe, Curlew storspove and Oystercatcher tjeld all setting up territories as are the Herring Gulls gråmåke in their colony within the reserve. The first Teal krikkand in Øygarden this year turned up on Husvatnet.

A big flock of noisy corvids brought my attention to a female Sparrowhawk spurvehauk rolling around in the mud with a Magpie skjære. As I approached to take some photos the rest of the Magpies and Hooded Crows flew off - but up to that point at least the Magpies had been mounting a concerted common defence effort - many of them having a go at the struggling raptor. More than twenty minutes later the Sparrowhawk was finally victorious (but had in fact started eating its victim whilst it was still very much fighting back!). 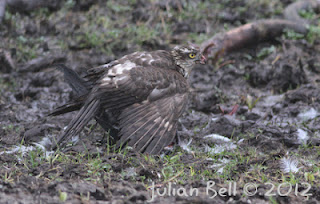 Finally some blood but the Magpie is still not dead 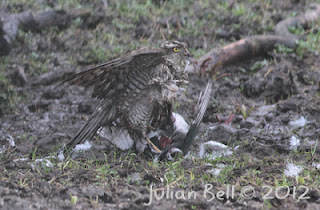 Both bird look to be in an absolute mess 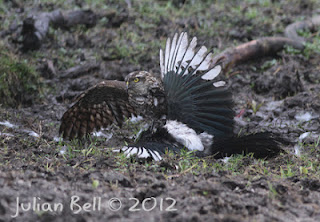 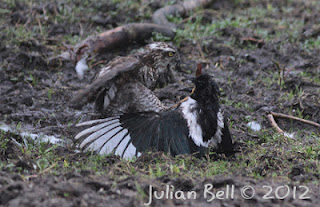 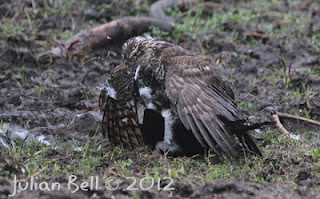 Ripping out feathers in order to be able to strike a fatal blow. 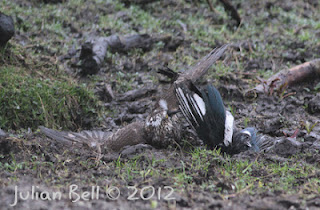 Rolling around in the mud 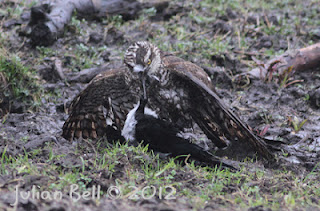 Go for the face is the best defence.... 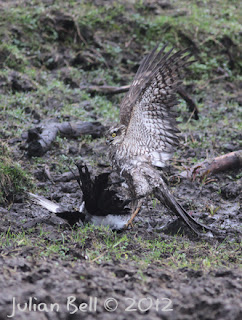 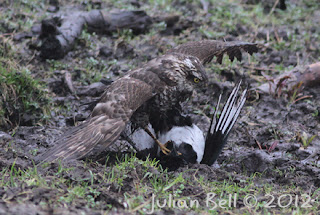 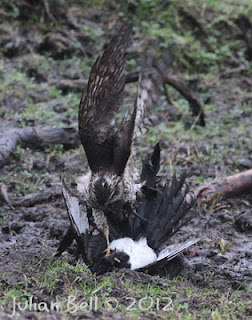 Not quite as warm as on my recent trip to Lanzarote but still very springlike.

During a quick stroll around the reserve I caught up with a number of spring migrants that arrived whilst I was away including a flock of five Skylark sanglerke, several Lapwing vipe, quite a few Woodpigeon ringdue and a lone Golden Plover heilo.

Below are a few random holiday shots depicting species we will probably have to wait a long time before we see them in Øygarden... 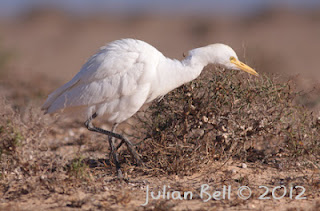 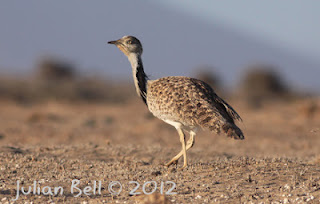 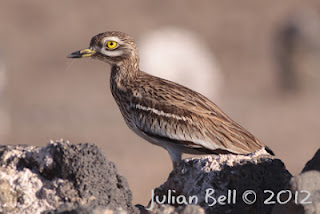