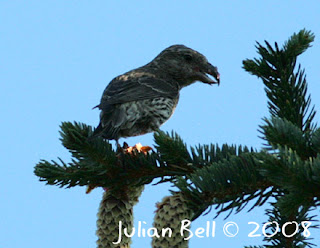 Juvenile Two-barred Crossbill båndkorsnebb - this bird was together with the male and female pictured below. 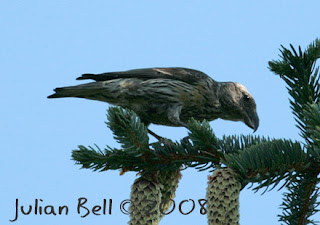 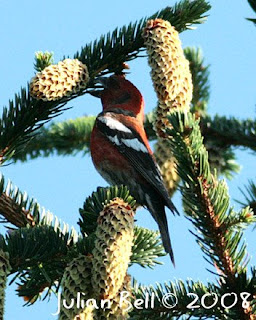 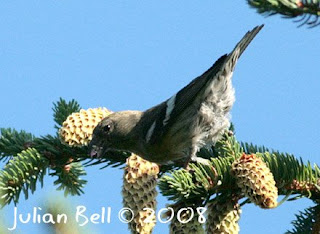 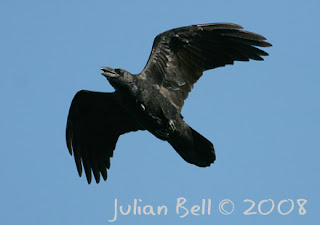 Raven ravn
Almost identical weather to the previous visit but very different birdwise. Very few waders passing, very little of anything in fact with just four Great Skua storjo and the first two southbound Red-throated Diver smålom.
However, all was not lost, the woods seemed to be full of Two-barred Crossbill båndkorsnebb, although I only ever saw five simultaneously. Plenty of Common Crossbill grankorsnebb too, though the two species tended to keep to themselves. Very difficult to photograph and with the baking heat I just took a few record shots, gave up and went home.
The male Red-backed Shrike tornskate was seen briefly on a drive-by past Herdlevær.
An unusual Starling stær on the wires outside my house made me look twice but it was just an abnormally pale bird.... 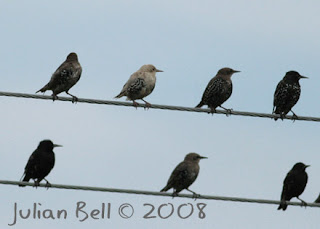 A Starling stær trying to be something more exciting and almost getting there....
Posted by Jules at 8:09 pm 0 comments 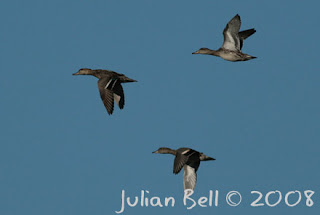 Pretty much the only birds of note were a flock of three Green Sandpiper skogsnipe in the reserve - a typical late July species at Tjeldstø. Some small flocks of Greylags grågås heading south for the winter and a few Ringed plover sandlo heard flying over.
Posted by Jules at 10:10 pm 0 comments 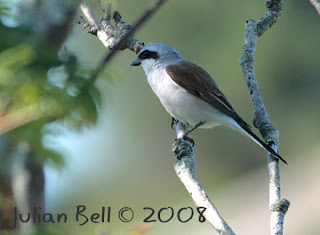 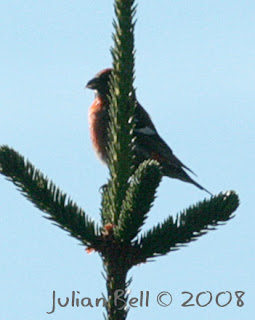 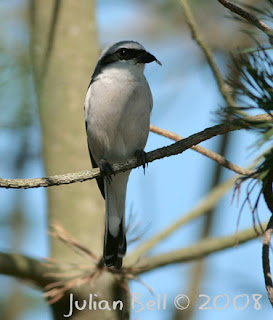 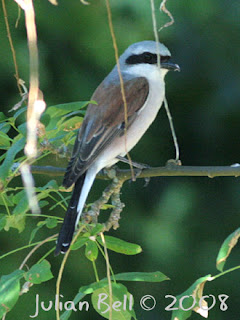 As usual Skogsøy provided plenty of interest. The highlights were a few Two-barred Crossbill båndkorsnebb in the woods - part of an ongoing influx. 15 were seen further south in Øygarden at Toft yesterday. Other good birds included a female Merlin dvergfalk and a few flyover Greenshank gluttsnipe.

With such calm conditions it was not surprising that it was just waders passing with almost 550 Oystercatcher tjeld in a couple of hours around dawn. A Knot polarsnipe and several migrating Grey Heron gråhegre were among the few other birds seen. 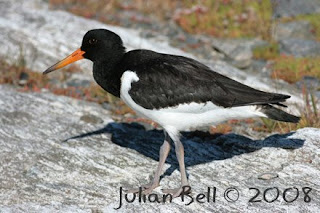 A drive-by at Herdlevær produced another good bird - a male Red-backed Shrike tornskate. 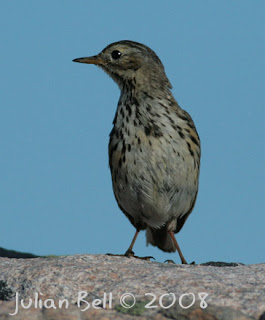 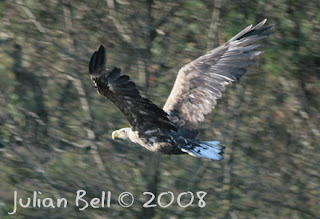 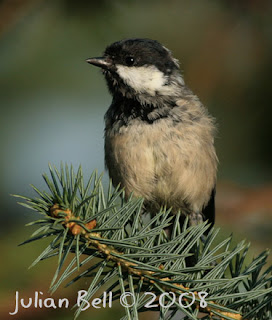 Coal tit svartmeis
Took an early morning stroll to escape the worst of the heat. Not much activity, although a White-tailed Eagle havørn made a pass through one of the gull colonies which are now emtying fast. Few waders on the move - only a few migrating Golden Plover heilo out in the reserve and most of the breeders now moved south.....
Still some Common Crossbill grankorsnebb about, a few Black-headed Gull hettemåke, a couple of Swifts tårnseiler and at least one sinensis Cormorant mellomskarv on Husvatnet.
Posted by Jules at 1:43 pm 0 comments 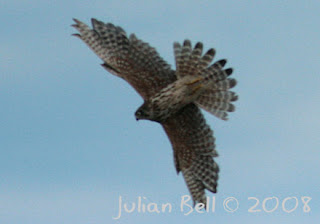 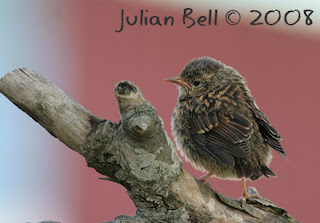 Hedge accentor jernspurv
Checked out the White-tailed Eagle havørn nest found yesterday from a safe distance - one young which looks like it could fly at any moment. The Merlin dvergfalk were also very active close by - but all that was to be found was a plucking post.
A very lost looking Hedge accentor jernspurv called for its parents....could easily have become merlin food.
Posted by Jules at 5:54 pm 0 comments

Email ThisBlogThis!Share to TwitterShare to FacebookShare to Pinterest
Labels: Merlin 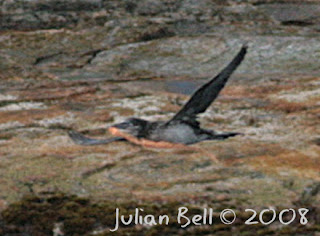 Gannet havsule trailing fishing line - this bird must be doomed 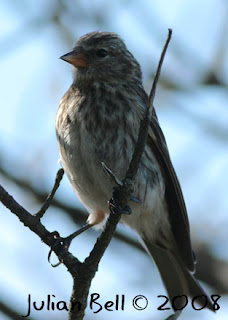 Redpoll brunsisik
Seawatching might not have been the most obvious choice with a brisk easterly blowing off the land - accompanied by light rain. However, Skogsøy proved productive enough as usual with a flock of three Green Sandpiper skogsnipe heading south as the highlight - the first of the year in Øygarden. Five summer plumaged Bar-tailed Godwit lappspove were also the first of the autumn. A few Shelduck gravand and a Whimbrel småspove were other migrants of note.
A light passage of Swifts tårnseiler was also noteworthy - all were seen a long way out to sea heading south.
Other birds included over 160 Northern Gannet havsule and at least seven Great Skua storjo. and small numbers of Puffin lunde, Guillemot lomvi and Razorbill alke.
Elsewhere in Øygarden I stumpled upon a White-tailed Eagle havørn nest and two rather vocal Merlin dvergfalk.
Posted by Jules at 6:49 pm 0 comments 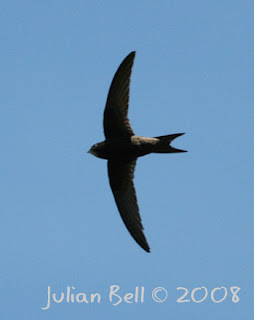 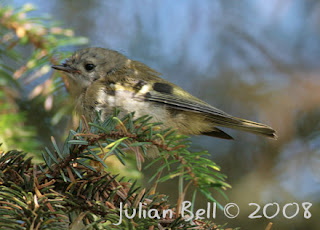 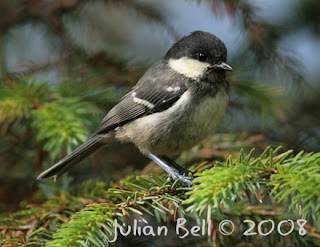 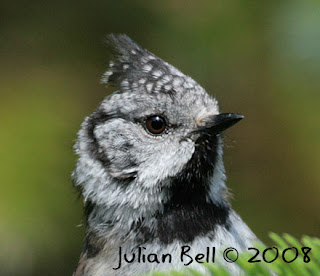 Above and below Crested Tit toppmeis 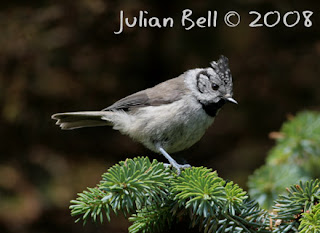 Not birding as such, but some continued indications of return wader passage with the first Ruff brusfugl of the autumn accompanying a small flock of Lapwing vipe south over Tjeldstø on 03 July and three southbound Whimbrel småspove over Herdlevær on 04 July.

Swifts tårnseiler, no doubt on extended feeding trips began to show on 05 July. Other indications of movement are small flocks of Common Crossbill grankorsnebb "everywhere". This seems to be part of a larger movement mirrored both on the Shetlands and offshore.

Otherwise the woods are full of fledged passerines and their overworked parents...
Posted by Jules at 6:43 pm 0 comments 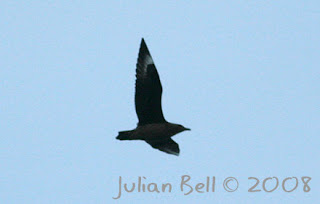 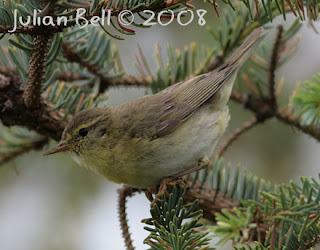 Willow Warbler lovsanger
Kicked the day off with a couple of hours seawatching at Skogsøy - well rewarded with a Manx Shearwater havlire, a 2cy Great Northern Diver islom, an Arctic Skua tyvjo and nine Great Skua storjo (including a flock of six) heading north.
Approximately 150 Northern Gannet havsule, a Northern Fulmar havhest and the usual auks also with a predominantly northerly movement.
At Breivik the Reed Warbler rørsanger was still singing along the the Sedge Warblers sivsanger and a Lesser Whitethroat møller sang in the same area.
Posted by Jules at 7:38 pm 0 comments 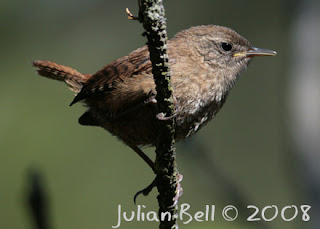 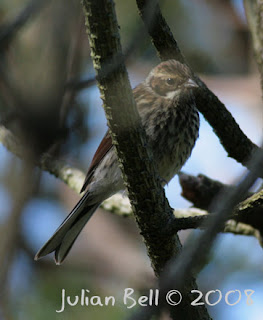 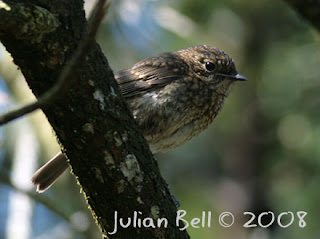 Young Robin rødstrupe
Not really birding at all, just catching up with things after a crewchange in Iceland.
Most of the passerines are feeding young, some of the waders have left already and some gull chicks still hatching. Unfortunately the same cannot be said of the terns - Arctic Terns rødnebbterne had begun to lay eggs earlier in the month but these are now gone, along with the birds.....
Lesser Whitethroat møller heard in the woods - looks like they may have bred at Tjeldstø. Skylark sanglerke still singing so it seems these too have bred close by this year....
Small numbers of Common Crossbill grankorsnebb knocking about and a few waders heading south the only sign of migration.
Posted by Jules at 7:21 pm 0 comments