Largely calm and springlike this week.

On Sunday 13 I did my usual round at Herdlevær where there was not much of interest to write about. On my way home Tjeldstø produced the first newly arrived Greylags grågås of the spring and there was a flock of Starling stær feeding there. It is always difficult to judge arrival dates for these species as they are generally seen throughout the winter here. However, there were generally more around this week. 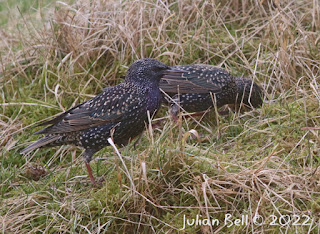 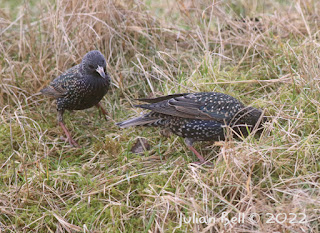 After this it was back home and up onto the roof to replace tiles lost and damaged in storms while I was away. Curlew storspove flying over the house along with Otter, White-tailed Eagle havørn and the usual. Whilst on the roof I saw that the recent storms had also deposited a decent amount of wood on the shore so the chainsaw saw some action too:)

In the garden Snowdrops were in full flower and both tulips and daffodils well on their way up. Some birdsong too - including both Robin rødstrupe and Wren gjerdesmett.

The next few days I was really stuck inside with work and other stuff, although a trip to the shops on 17.02 produced my first local Tufted Duck toppand of the year and Greylags grågås also arrived at Nautnes with birds circling the house on and off all day. An adult Kittiwake krykkje also flew right past the terrace.

With computer / office chair induced back pains I pretty much had to get on 17.02 and although I only managed a short trip to Hjelme Vest this proved relatively productive with the first Puffin lunde of the year, my first Red-throated Diver smålom for 2022 and a selection of the usual suspects including small numbers of Long-tailed Duck havelle, a few Black Guillemot teist, a small flock of Purple Sandpiper fjæreplytt and a Razorbill alke on the sea. Best birds on land were a Woodcock rugde and a Sparrowhawk spurvehauk.

A couple of pods of Porpoise nise put in an appearance along with the ever-present Otter.

To put my "computer back" right I did Skogsøy on 18.02 and spent an hour seawatching. Highlight was again a Peregrine vandrefalk coming in off the sea with an auk in its talons. There was a light passage of large gulls and Kittiwakes krykkje heading north as well as 25 Gannets havsule and a Little Auk alkekonge- A Black Guillemot teist headed south along with an unidentified large diver.

In the evening there was an amazing display of the Northern Lights from my terrace. For once I just enjoyed it instead of messing around with my camera and generating yet more computer time:) 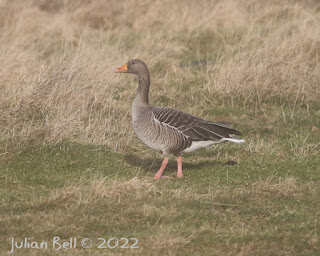 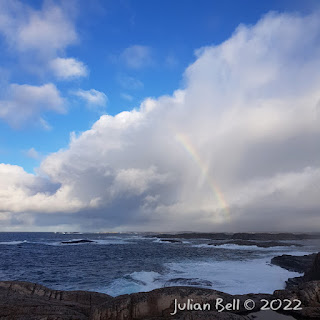 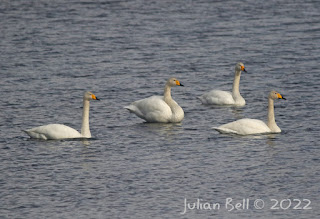 Four of the five Whoopers sangsvane at Kollsnes - still no 2cy birds thus far this winter:(

On 19.02 I should have been on my way to the UK but the flight was cancelled. Apparently due to bad weather, although it was once again calm and sunny here. I popped in at a few locations starting with Dåvøy where there were at least 45 Herons gråhegre at the roost. On the sea several Guillemot lomvi and a Red-throated Diver smålom were of interest. Passerine-wise a flock of eight Goldfinch stillits were the best sighting here.

Next up was Solberg which was rather quiet but the trip made worthwhile by a flyover Snow Bunting snøspurv.

A small flock of Purple Sandpiper fjæreplytt, around 20 Siskin grønnsisik, a few Goldfinch stillits and a couple of Jays nøtteskrike were among the sightings at Tjeldstø on the way home. 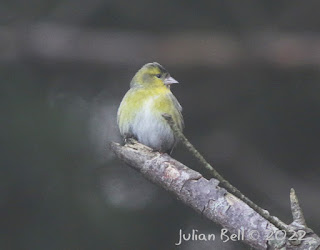 Siskin grønnsisik at Tjeldstø - a more normal winter for this species this year - compared to last winter when this species was notable by its absence.

A Curlew storspove on the shore and at least three White-tailed Eagles havørn were the best birds from the terrace after I returned home.

My first trip to Engerdal this year.

Being in the east of Norway things were definitely a lot more wintery than back home with almost all fresh water frozen, snow cover and temperatures down to -16.

Still very much doing the home office thing but did get out a few times and managed some productive birding on a couple of occasions.

On 03 February I did my usual drive to check a few localities. Nothing surprising at any of these but a White-tailed Eagle havørn flying over the road was the first I've seen in these parts. The species has occurred in Engerdal quite regularly over the last few years, just not when I have been there:) Nuthatch spettmeis on the terrace 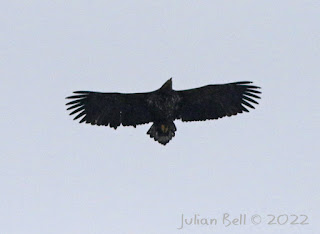 A couple of Hazel Grouse jerpe during the day on 06 February and a Tengmalm's Owl perleugle singing in the evening were of rather more interest to me than the eagle a few days beforehand.

Struggling to find birds I opted for a dawn raid in the hills on 07 February, this turned out very well indeed with a host of good species seen - a flock of three Siberian Jay lavskrike, a couple of Pine Grosbeaks konglebit, Black Grouse orrfugl and Capercaille storfugl being the best of the sightings. 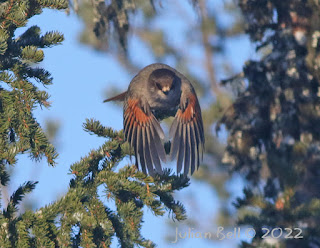 Lots of interesting tracks in the snow too.

Other wildlife seems plentiful if the tracks in the snow are anything to go by. Only animals actually seen were Red Squirrel, Roe Deer and Elk. 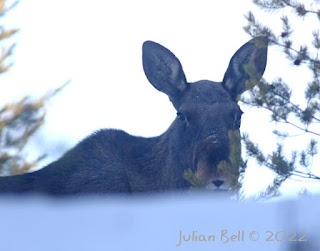 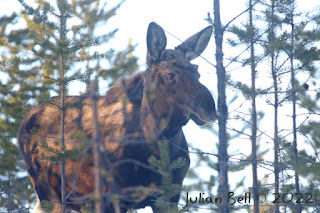 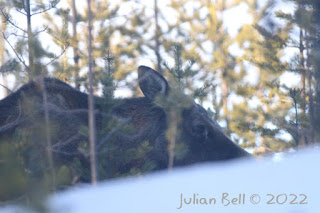 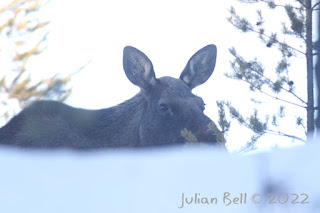 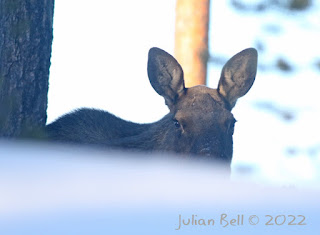