A couple of hours spent seawatching at Skogsøy early on 13 March under calm and sunny conditions produced more of the usual suspects with 130 Oystercatcher tjeld heading north along with three Curlew storspove along with the usual Gannets havsule, Auks, Kittiwake krykkje etc.

A whole squid on the tideline was an unusual find on the way out - normally it is just the "bone" that gets washed up.

The first visit to Hernar this year produced 29 species. Although nothing remarkable was seen a couple of Song Thrush måltrost may well have been new arrivals (although they could theoretically have overwintered), Snow Bunting snøspurv, Skylark sanglerke and about 70 Starling stær were among the other migrants seen. Otherwise just a couple of White-tailed Eagles havørn, some Rock Pipits skjærpiplerke getting territorial and a couple of small flocks of Long-tailed Duck havelle.
Posted by Jules at 5:10 pm 0 comments

Weather alternated on a daily basis between wet and windy to calm and sunny. 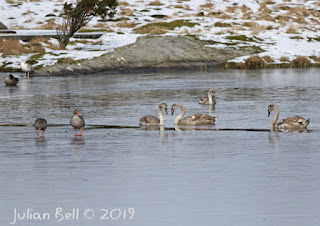 No birding to speak of 08 and 09 with drive-bys during errands producing the usual suspects including the four Mute Swans knoppsvane. 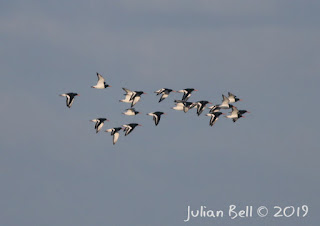 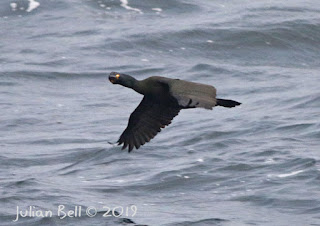 Who is watching who here? 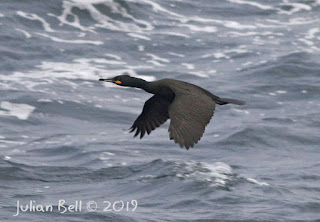 On 10 March I squeezed in almost two hours of seawatching at Skogsøy. Migration was in full swing with birds passing most of the time. Best bird here was a Snow Bunting snøspurv (and another heading north on the way out). 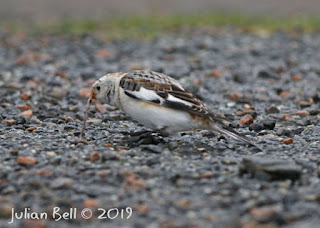 Probably a very unusual photo - Snow Bunting eating a worm! (Normally I only see them eating seeds away from the breeding grounds) 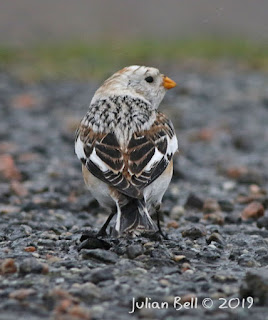 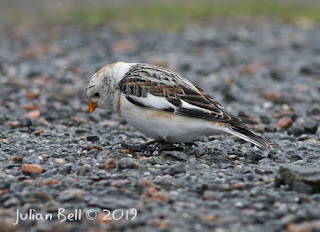 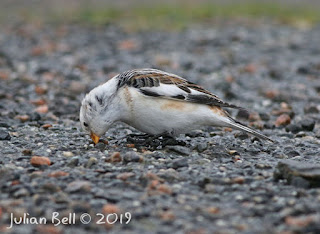 On 11 - 12  March there was barely even time for a drive-by anywhere at all so the best bird was actually found in my driveway by my youngest on her way home from school. After warming herself by the fire and talking about her day she casually pulled her phone out and showed me a photo she had taken  a cracking male Snow Bunting snøspurv. I grabbed my camera and went outside - luckily it was still there. After snapping a few pics I went back inside and carefully explained that in future she can jump over social niceties like saying hello and asking how I am and just show me the picture.
Posted by Jules at 10:47 pm 0 comments

Chilly southerly wind and rain after around 1230.

Despite the worst weather thus far this week I was out birding for real today! Not just drive-bys but actually out with the scope. Magic!

I started at Hjelme West which proved quite productive - the highlight being the first Red-necked Grebe gråstrupedykker of the year (also the first for the county).  Numbers of seaduck were up at last with around 110 Long-tailed Duck havelle and over 30 Common Scoter svartand. Other regulars here included a Black Guillemot teist, over 20 Oystercatcher tjeld, 40 Purple Sandpipers fjæreplytt, a Curlew storspove and White-tailed Eagle havørn. Despite the wintery feel a Skylark sanglerke flew over too.

After this I checked out Alvheim (virtually nothing - definitely getting the feeling this locality is not as good as it once was), Solberg (just a couple of White-tailed Eagle havørn and FINALLY a few Long-tailed Duck havelle here too) and Dåvøy where the Grey Heron gråhegre roost numbered 26 birds.

Tjeldstø still held the Mute Swans knoppsvane along with the long staying two Wigeon brunnakke and Tufted Duck toppand. A lone Lapwing vipe beside Husvatnet was potentially the same bird I had there a few days ago. The first Oystercatcher tjeld of the year for this locality also turned up.
Posted by Jules at 8:54 pm 0 comments

A fantastic week weather wise. It was the half term holidays so this, combined with work, predictably meant there was little time spent out and about. However, spring has sprung and there has been something of interest most days even if most birding was either drive-bys or from the terrace/office. 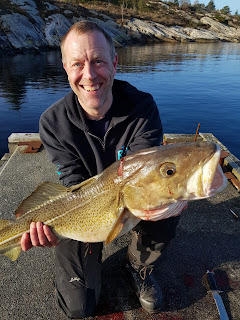 
On 24.02 I abandoned plans for a birding trip in favour of fishing with my youngest. This turned out pretty well with two Cod torsk to 6.5kg and 5kg along with a few Haddock hyse (largest 3kg) and various other bits and bobs. With White-tailed Eagle havørn overhead, Curlew storspove and other birds this was a very nice afternoon. A short walk at Breivik in the morning produced little other than a couple of Skylark sanglerke - a species seen various places during the week. 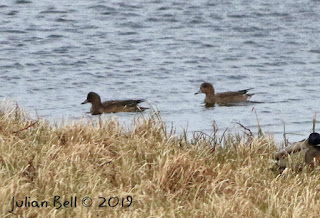 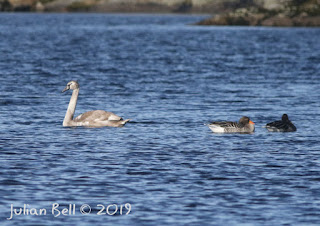 
The Mute Swans knoppsvane remained on Husvatnet all week - the longest staying birds in Øygarden ever! Other stuff seen at Tjeldstø during the week included the first Lapwing vipe of the year (28.02), two Wigeon brunnakke (all week), Greylag grågås  numbers continued to increase and VJ3 was seen  again on 28.02. Peregrine vandrefalk and up to five White-tailed Eagles havørn also put in an appearance here. 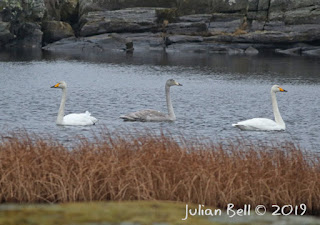 A short walk at Herdlevær on 27.02 was relatively quiet but the first migrating Oystercatcher tjeld passed during a coffee break.

Another new for Øygarden this year was a Common Gull fiskemåke at Vik on 25.02. 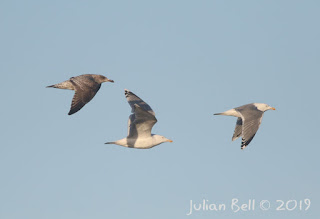 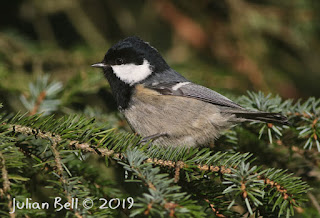 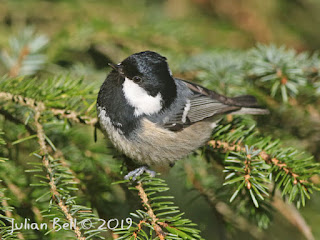 Coal Tit svartmeis. Occasionally I take pictures of the common stuff too....


On 01.03 I did a cheeky pre-work seawatch - obvious movement of auks heading north but rather distant for the most part. Three White-tailed Eagles havørn joined 11 Raven ravn to eat something they found / stole on the shore - shortly afterwards some rather vocal Otters swam past...At least as good was a flock of over 50 Eiders ærfugl, proving they are not quite extinct yet.

Others who have been out and about of late have seen the first Shelduck gravand of the year, Goshawk hønsehauk, Little Auk alkekonge and more.

Potentially the most interesting bird of the week was a / the "yellow-legged" gull seen last week. This time I managed to see it a bit better and take some more photos. Although there are some features that point to Yellow-legged Gull gulbeinmåke I am not yet convinced of the identity. The amount of variation in these species certainly doesn't help. 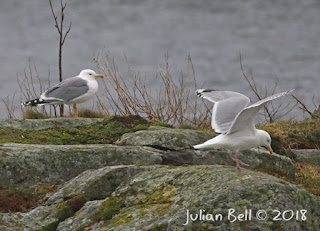 Here the wing formula of Herring Gull gråmåke can be seen for comparison. No black on P5. 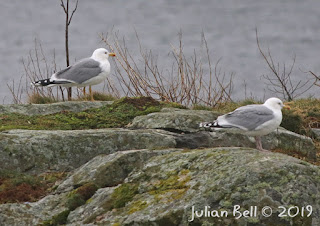 The gull to the left seems to have longer tibia, is slightly darker than the Herring Gull gråmåke to the right and has a longer primary projection along with less white in the primaries.... 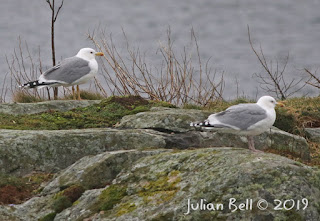 More primary tips visible (5) past the tertials on the yellow legged  gull and more beyond the tail too - so longer winged that the Herring Gull. 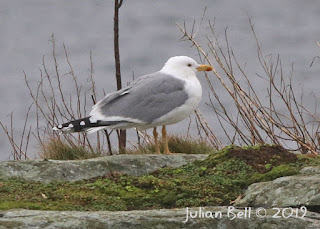 A more cropped image. darker eye than Herring Gull with red orbital ring (though this is also a feature of some Herring Gulls with yellow legs). Quite a heavy beak with pronounced gonys. 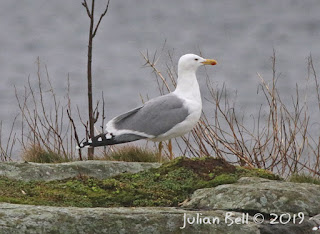 Variation in head shape. A Hooded Crow started alarming and this bird became nervous - I did not dare to turn away to see the cause of the alarm in case I could clinch an open wing shot.... 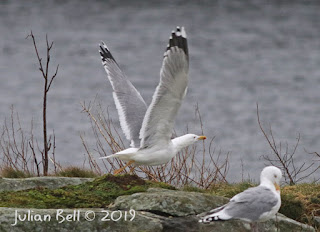 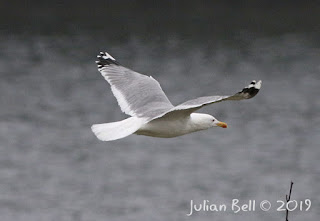 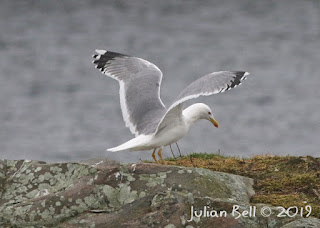 Top of wing shot. No white moons on mid-primaries and black band on P5 visible. BUT all white tip to P10 is not necessarily positive....