Another productive few hours at Herdlevær though once again few passerines about. Numbers of resting / feeding wader well down from the other day but still Sanderling sandløper, Knot polarsnipe, Turnstone steinvender, Ringed Plover sandlo, Dunlin myrsnipe and Common Sandpipers strandsnipe about. Unusually a single Curlew Sandpiper tundrasnipe was among the resting birds. 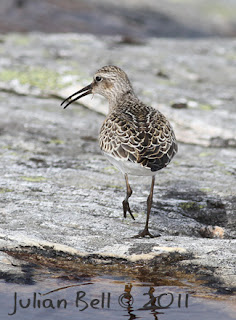 Above and below: Curlew Sandpiper tundrasnipe 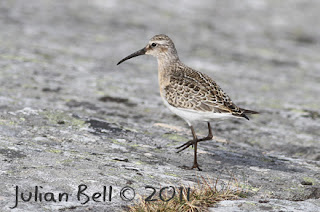 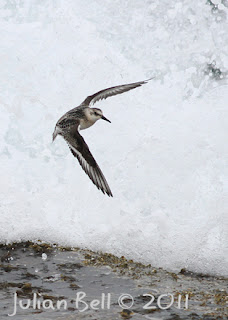 Above and below: Sanderling sandløper 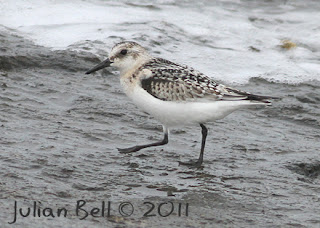 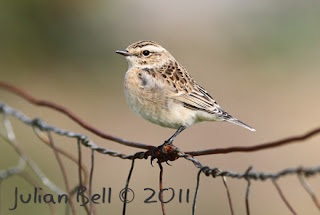 Whinchat buskskvett
A couple of Black-tailed Godwit svarthalespove headed south along with small numbers of other waders. Cormorants storskarv were the most numerous species on the move today with around 140 heading south in 1.5 hours. Several Great Skua storjo and at least two Peregrines vandrefalk about meant that there was always something to see.
Posted by Jules at 4:58 pm 0 comments


A trip to Solberg showed that it would have been good for seawatching - lots of Gannets havsule, a small flock of Common Scoter svartand and a Red-throated Diver smålom passed in the few minutes I spent there. Best bird here was a Peregrine vandrefalk that gave excellent views - typically I had left the camera in the car.... 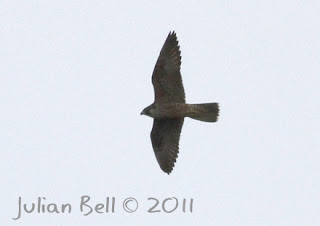 Not the best of seawatching weather and nothing like the level of activity as at Herdlevær yesterday. 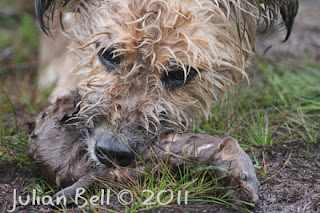 One less Mink to worry about
Some birds on the move with the best one being a Manx Shearwater havlire heading south shortly before I gave up and went home. An obvious passage of Great Black-backed Gulls svartbak again today as well as smaller numbers of waders including Ruff brushane, a couple of Little Stint dvergsnipe, a few Whimbrel småspove, a Spotted Redshank sotsnipe along with most of the usual passage waders.
On the way home the dog and I managed to catch and kill a Mink - a good team effort. Not far from where the dog nailed his previous one...
Posted by Jules at 1:37 pm 0 comments

Southerlies with light showers
A quick look at Solberg produced small numbers of waders and an Otter eating a huge flatfish but little else.
Herdlevær was very quiet for passerines but for everything else it was a different story. Despite the late and lazy start there was non-stop action at the coast. Flocks of waders were passing constantly - most too far off to be identified. Oystercatcher tjeld, Golden Plover heilo and Ruff brushane were the commonest identified but plenty of Dunlin myrsnipe, Ringed Plover sandlo, Knot polarsnipe and other species. Several hundred waders passed in total. 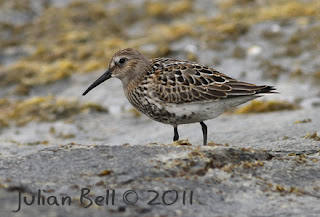 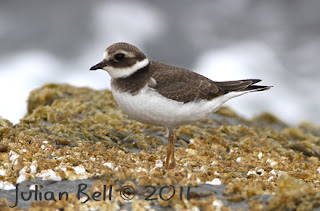 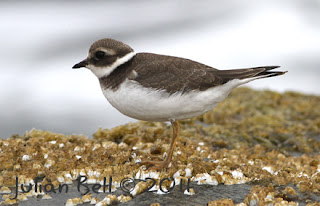 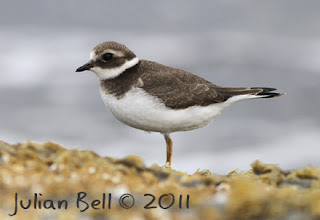 Many waders also stopped to feed on the islands - largely Knot polarsnipe, Ringed Plover sandlo, Dunlin myrsnipe and Sanderling sandløper.
However, the undoubted highlight was a flock of FIVE Little Gulls dvergmåke - an adult summer and four first year birds. This is probably the biggest flock ever recorded in the county. Two Little Stint dvergsnipe - always a good bird in Øygarden passed in a mixed flock of Dunlin and Ringed Plover.
Other sightings of interest included the first pale-bellied Brent Geese ringgås of the autumn heading south, a couple of dark phase Arctic Skua tyvjo, a Great Skua storjo and a Red-throated Diver smålom - the first of the autumn for me.
Posted by Jules at 6:20 pm 0 comments 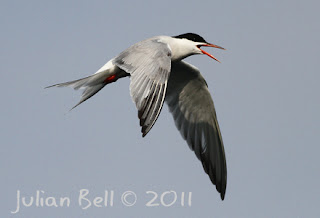 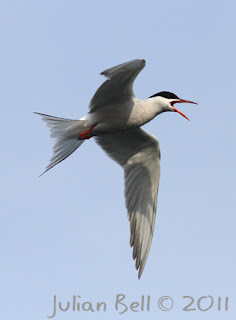 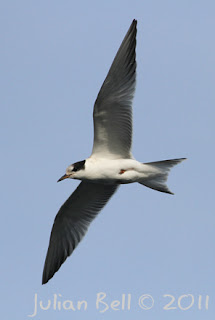 An evening stroll in front of the house produced little out of ordinary but nice views of a couple of Common Tern makrellterne feeding young - almost a rare sight in itself these days
Posted by Jules at 6:05 pm 0 comments

Southerly winds and partly cloudy at first.
One of the first birds seen was a Common Rosefinch rosenfink - probably the same bird also seen later on together with another. Other migrants included a couple of Garden Warbler hagesanger, a Tree Pipit trepiplerke, a Spotted Flycatcher gråfluesnapper and a Pied Flycatcher svarthvit fluesnapper with a hint of a second wing bar.
Over 60 Twite bergirisk, plenty of waders flying over, a couple of flocks of Greylags grågås and most of the local breeders still present meant things were pretty busy for most of the morning. 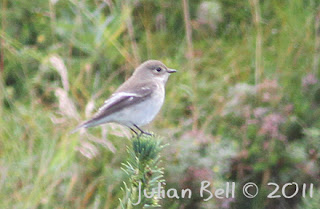 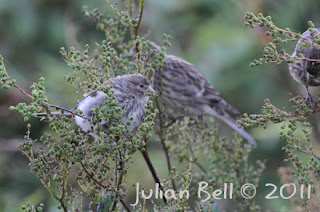 Loads of Twite bergirisk about 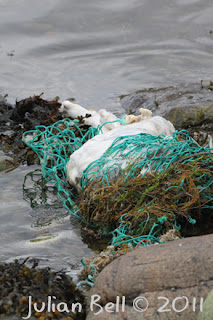 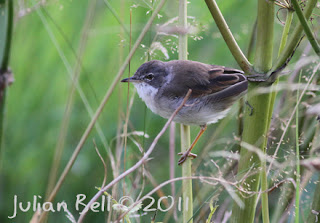 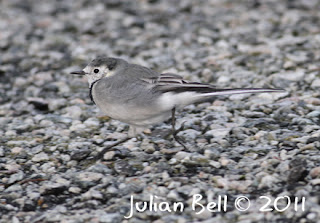 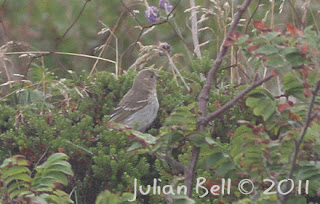 Record shot of one of the Rosefinches rosenfink
A strange find was a dead sheep entangled in a trawl net floating in the sea....perhaps the animal became caught in it whilst grazing on seawed at low tide only to be drowned at high tide?
Posted by Jules at 4:43 pm 0 comments

A couple of Two-barred Crossbill båndkorsnebb and a flock of Common Crossbill grankorsnebb flying over the garden promted a trip out to Herdlevær.


Herdlevær produced little other than a few Whinchat buskskvett, two Greenshank gluttsnipe and some Fieldfare gråtrost on the move.
An evening stroll through the reserve produced the first Wigeon brunnakke of the autumn, 25 Golden plover heilo, three Ruff brushane, six each of Snipe enkeltbekkasin and Lapwing vipe, two Wood Sandpiper grønnstilk and a Greenshank gluttsnipe.
Posted by Jules at 11:25 am 0 comments

Not out yet again.

A couple of Jay nøtteskrike flying over the road at Rong were a little unseasonal.

Six Teal krikkand and the usual Whinchat buskskvett, Wheatear steinskvett etc as I drove past Kollsnes.

Waders included a couple of Dunlin myrsnipe and several Ringed Plover sandlo. Highlight was the first Lesser Whitethroat møller at this locality for some time.

After dark a bat flaggermus flew around the house for a while - a rare sight indeed. Might also be a migrant...?
Posted by Jules at 6:23 pm 0 comments

South-easterly winds and some light rain.


Before the rain started a walk in the reserve produced a flock of three Green Sandpiper skogsnipe and a single Bar-tailed Godwit lappspove flying over.
Posted by Jules at 2:49 pm 0 comments

Not out at all but had Spotted Redshank sotsnipe and a couple of White-tailed Eagles havørn over the garden.
Posted by Jules at 2:47 pm 0 comments

Unfortunately I only managed 15 minutes there and managed only to connect with the Wryneck vendehals.....
Posted by Jules at 6:49 pm 0 comments

Light westerlies with showers early on.


A decent morning in the field. Highlights at Hernar were the first Garden Warblers hagesanger in Øygarden this year and a fly-by Pinkfoot kortnebbgås - also the first in Øygargen this year.
Other migrants included a couple of Whinchat buskskvett, Greenshank gluttsnipe, an early Brambling bjørkefink and plenty of Willow Warbler løvsanger. At least 40 Twite bergirisk and most of the Hernar regulars meant there was lots to see most of the time. 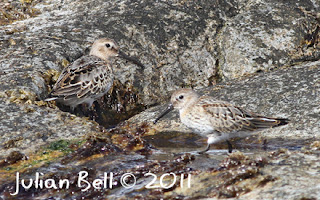 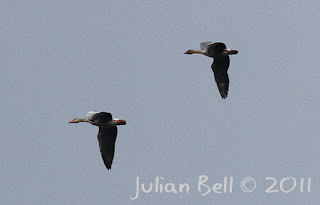 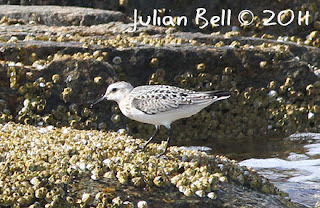 Sanderling sandløper
On the islands waders included several small flocks of Knot polarsnipe, several Dunlin myrsnipe and a Sanderling sandløper. A Merlin dvergfalk obviously had its eye on the waders too....
Back at Tjeldstø a flock of eight Swifts tårnseiler was the biggest flock thus far in 2011.
Posted by Jules at 10:50 pm 0 comments

Not out much. However, two Great-spotted Woodpeckers flaggspett at two different locations showed things are on the move and are a good indication of an irruption later in the autumn.
A couple of Bar-tailed Godwit lappspove flew over with a flock of Ruff brushane at Breivik but little else of note.
Posted by Jules at 12:47 am 0 comments

Overcast with light southerlies.
Generally a lot about - large numbers of the usual finches and Meadow Pipits heipiplerke dominiating. Also a couple of Whinchat buskskvett and at least two Swifts tårnseiler - things are obviously on the move.
Willow Warblers løvsanger, Whitethroats tornsanger and a Chiff-chaff gransanger also present.
Along the shore a minimum of seven Common Sandpiper strandsnipe were among the waders; more waders were seen heading south over the sea inlcuding Knot polarsnipe and Ruff brushane.
Singles of Arctic Skua tyvjo and Great Skua storjo in among all the usual suspects.
Posted by Jules at 6:47 pm 0 comments

I received text messages in the early hours of the morning reporting a successfull Storm Petrel havsvale ringing trip at Herdlevær. A good start to the day - better if I'd actually been there.
Otherwise little time in the field and correspondingly little seen - although female Scaup bergand remained at Tjeldstø.
Small numbers of waders seen at Hjelme West included a several Tursnstone steinvender.
Posted by Jules at 10:55 pm 0 comments


For the most part a typical mid August day - a Spotted Redshank sotsnipe, a Greenshank gluttsnipe, a Wood Sandpiper grønnstilk, a Green Sandpiper skogsnipe, five Ruff brushane, five Golden Plover heilo, an Oystercatcher tjeld, four Lapwing vipe and a Common Snipe enkeltbekkasin all in the reserve. 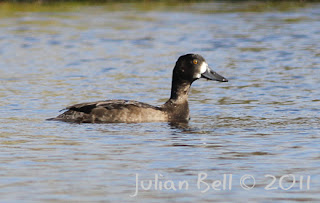 Above and below: female Scaup bergand - unusual time of year for this species in Øygarden 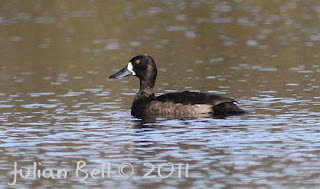 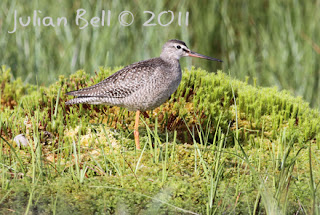 Above and below: Spotted Redshank sotsnipe - an altogether more typical visitor in mid August 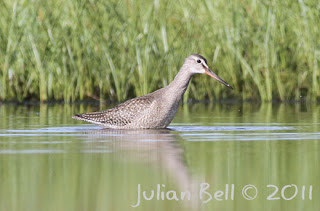 Rather unusually a female Scaup bergand was also in the reserve - a very strange time for this species to occur -in fact this may even be the first August record. It was also  the first this year for Øygarden.
Posted by Jules at 10:49 pm 0 comments

No back to earth experience on returning to Øygarden this time! A couple hours seawatching around dawn did not disappoint.

A couple of Great Skua storjo knocking about too.

A brief look at Herdlevær showed there was some movement with, among other things, a couple of female Blackcaps munk present.
Posted by Jules at 11:07 am 0 comments

I don't normally post about birds away from Øygarden but a three day pelalgic off Maderia really deserves a mention. Watch this space!

Now starting to update my website with some pictures - starting with Bulwer's Petrel: 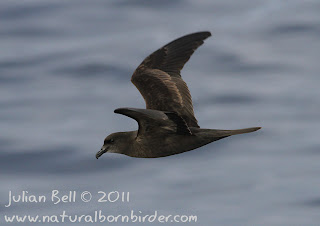 For more pictures of Bulwer's see this page
Posted by Jules at 10:57 am 0 comments


Little migrant activity today with the highlight being a flock of three Common Crossbill grankorsnebb flying over - the first at Tjeldstø this year.
Many species forming flocks now - for example the Linnet tornirisk flock now numbers 40.
Very few young gulls about - for example along with approximately 50 adult Herring Gulls gråmåke there were just nine birds of the year.
Posted by Jules at 8:16 pm 0 comments