Light NW wind and sunny. Thaw started as soon as the sun came up.
A quick check at Solberg revealled that there was a considerable movement of birds, largely auks, heading north but were rather distant. A flock of four Snow Buntings snøspurv also headed north.

A short seawatch from Herdlevær produced another flock of five Snow Bunting snøspurv flying north and a good movement of auks - most too distant too identify but Puffins lunde, Guillemots lomvi and Razorbill alke were all involved. Plenty of Gannets havsule, small numbers of Kittiwakes krykkje and just under 200 Oystercatcher tjeld also passed during the hour I sat there.
Posted by Jules at 1:11 pm 0 comments

Snowed all day! Not what the forecast said at all.
It was a struggle to find much of anything and in the end all of what little action there was happened at Tjeldsø where the first Woodpigeon ringdue of the year were the highlight (the first for Øygarden turned up on 09 March). A Lapwing vipe, a Common Snipe enkeltbekkasin and three Skylark sanglerke were other signs of spring.
Posted by Jules at 6:54 pm 0 comments

Highlight was the first Black-headed Gull hettemåke of the year heading north.
Posted by Jules at 6:49 pm 0 comments

Quite nice in between the hail showers...

Hjelme West was dismally quiet but the first Shelduck gravand of year (flying south) saved the day. A couple of Common Redpoll gråsisik were also the first of the year for me - a species that has all but vanished from Øygarden after the unprecedented numbers last autumn / early winter. Fifty Oystercatcher tjeld heading north and more resting on the rocks showed that spring is in fact progressing.

At Tjeldstø two Mistle Thrush duetrost remained. Starling stær numbers now well in excess of 100 and Greylags grågås increased to 11. A flyover Skylark sanglerke did its best to make it seem a bit more springlike.
Posted by Jules at 2:46 pm 0 comments

Strong gale but no rain today.

Checked a few of the usual localities but all the action was at Tjeldstø with two Mistle Thrush duetrost present today as well as the first two Common Snipe enkeltbekkasin of the year and the first migrant Greylags grågås - a flock of five.
Posted by Jules at 1:36 pm 0 comments 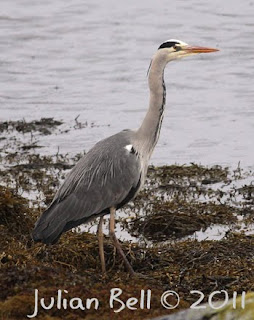 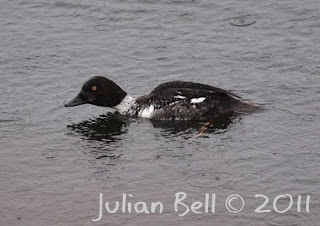 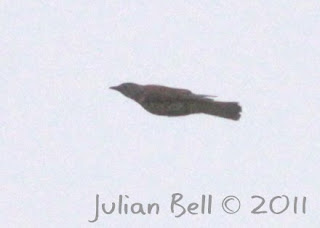 Strong south westerly with rain.
Not the most pleasant of conditions today but despite this (or rather because of it) there were a few birds to see. The best sighting was another Mistle Thrush duetrost at Tjeldstø, next best was the first Teal krikkand of the year in Øygarden - a male on the sea at Alvheim.
Six Whoopers sangsvane were back at Tjeldstø - good to see that some managed to hang on through the cold spell. A female Siskin grønnsisik at the feeder was the first in the garden this year.
Posted by Jules at 11:50 am 0 comments 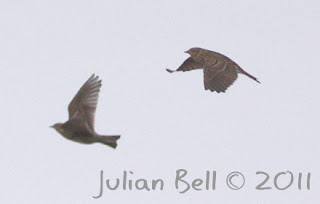 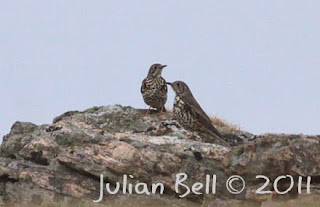 Calm with a hard frost.
Spring migration continued today with over 75 Gannet havsule, 25 Oystercatcher tjeld and the first Puffin lunde of the year heading north. A southwards movement of Shags toppskarv was also typical for the time of year.
More auks today but the vast majority at extreme range.
A couple of Great Northern Diver islom flew south and there was another Puffin lunde on the sea.
A drive-by at Herdlevær produced a flock of eight Skylark sanglerke and the best sighting of the day - two Mistle Thrush duetrost.
Posted by Jules at 5:06 pm 0 comments

A couple of Lapwing vipe at Tjeldstø were the first of the year here and a Greylag grågås was probably the same bird that has been knocking around for the last month or so.
Posted by Jules at 7:10 pm 0 comments

A quick check at a few localities produced rather little. Only new birds in were Oystercatchers tjeld at both Solberg and Alvheim.
Posted by Jules at 1:59 pm 0 comments 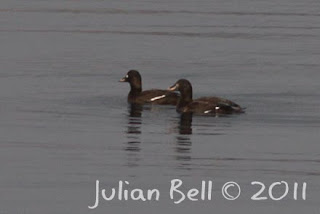 Virtually no passerines whatsoever but a Slavonian Grebe horndykker (same bird as seen from Dåvøy), a couple of Velvet Scoter sjøorre and a small flock of Purple Sandpiper fjæreplytt were seen.
Posted by Jules at 8:51 pm 0 comments