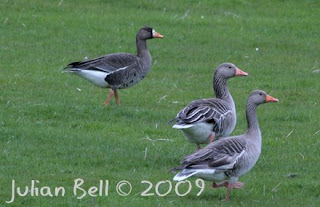 Greeland Whitefront tundragås with Greylags
Best birds by far were a pair of rather flighty Gargany knekkand which moved around the various lakes in the reserve. A singing Lesser Whitethroat møller was another first for the year. Another highlight was a male Merlin dvergfalk which made several passes over the reserve. No sign of the Whitefront tundragås seen yesterday but this long staying bird may well still be in the area.
Five Tufted Duck toppand on Rotevatnet were probably migrating birds.
Other than that it was pretty much business as usual with plenty of breeding waders, gulls and geese.
Posted by Jules at 11:53 am 0 comments 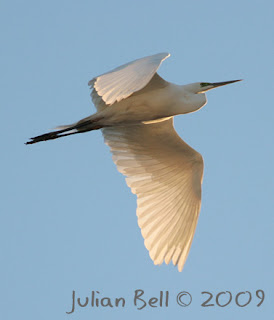 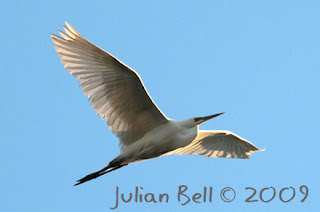 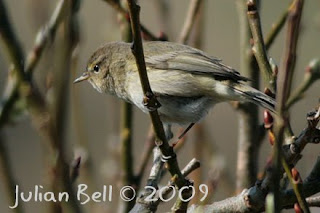 One of the many Chiff-chaff gransanger present on Hernar today 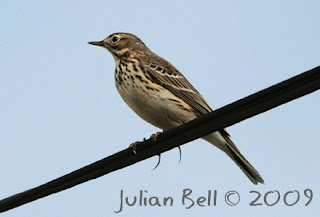 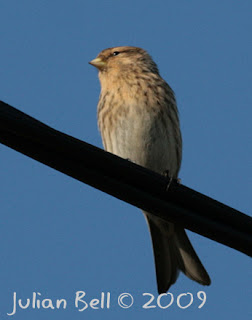 Decided to opt for Hernar today and was very pleased I did so - whilst waiting for the boat to leave a Great Egret egretthegre came flying over from the north and disappeared southwards. This represents only the second record for Øygarden.

Hernar itself was lifting with migrants -although none could compete with the egret. A minimum of six Chiff-chaff gransanger, a Willow Warbler løvsanger, two Blackcap munk and at least eight Wheatear steinskvett were seen.

Good numbers of Twite bergirisk, Linnet tornirisk, a Pied Wagtail svartryggerle and several White Wagtail linerle meant that there was always something to see.

Back home at Tjeldstø the Greenland Whitefront tundragås fed beside Husvatnet and a juvenile Golden Eagle kongeørn flew over the reserve - a long awaited new species for my garden list which now stands at 154. 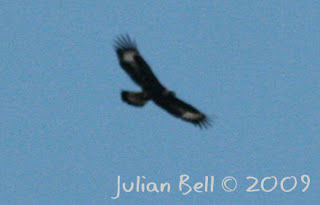 Distant record shot of Golden Eagle kongeørn - from the garden... 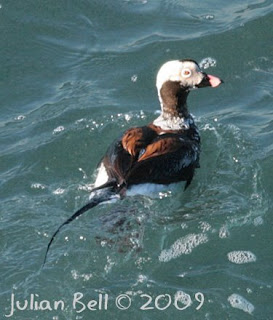 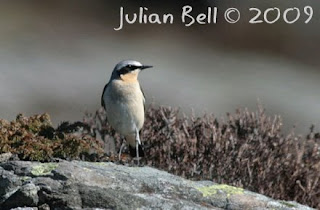 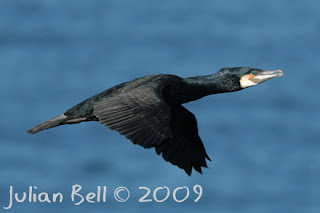 Cormorant storskarv
A late and lazy seawatch was too late to catch the early morning movement but had 19 Red-throated Diver smålom in a couple of hours seawatching. A Shelduck gravand and small numbers of Common Scoter svartand and Cormorant storskarv also on the move.
Highlight was a second year Glaucous Gull polarmåke feeding with other gulls offshore.
A few Twite bergirisk and a host of other migrants seen and heard on the way out.
A male Wheatear steinskvett at Kollsnes and another heard singing from my garden were signs of new arrivals.
Posted by Jules at 8:06 pm 0 comments 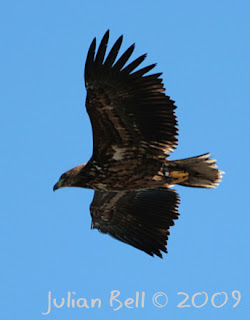 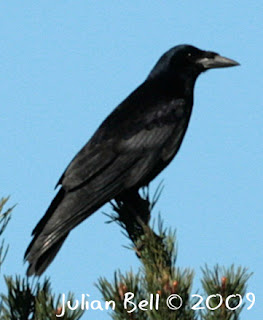 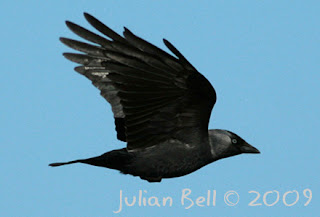 After a week away in Northumberland I came back to find I'd missed out on a Smew lappfiskand that would have been a new species for my house list....however, the birds "back home" were well worth it.
Plenty more new arrivals today in the form of Linnets tornirisk, Reed bunting sivspurv, a Rook kornkråke, 10 Jackdaw kaie, Hedge Accentor jernspurv and a singing Chiff-chaff gransanger.
Lots of activity in the reserve with various species of wildfowl and wader obviously well established and possibly even on eggs.
In the evening a Redshank rødstilk was another new arrival at Tjeldstø and the long staying Greenland Whitefront tundragås turned up again.
Posted by Jules at 1:18 pm 0 comments 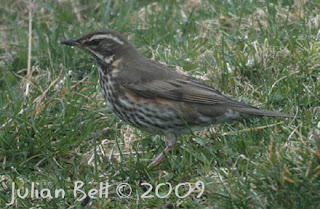 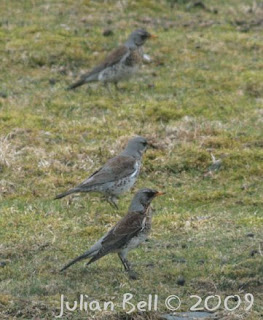 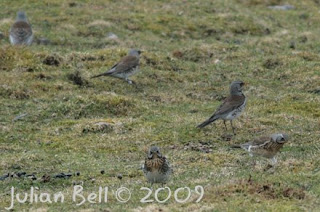 Migration fairly obvious today - in common with the last few days there have been flocks of thrushes and Starlings stær in many of the fields. At Tjeldstø there was a flock of 30 Fieldfare gråtrost. The Pochard taffeland and the the Greenland Whitefront tundragås also remain on Husvatnet. 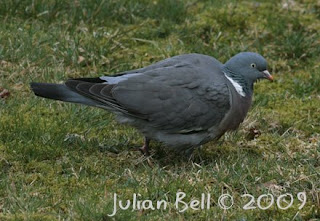 Woodpigeon ringdue
A small flock (25) of Purple Sandpiper fjæreplytt were at Solberg but visibility was severely restricted by fog.
Posted by Jules at 2:17 pm 0 comments 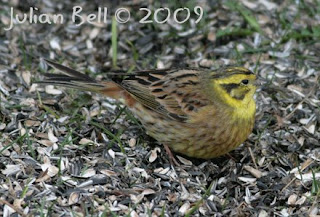 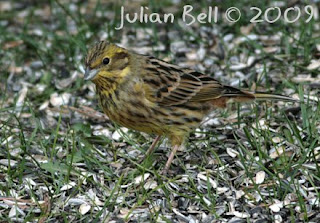 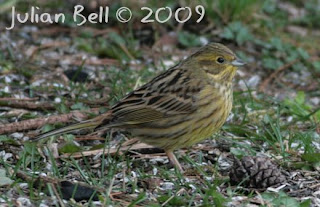 Barely out today and it was thus the garden that once again provided most of the action today - three Yellowhammer gulspurv being the best birds - and another first for the year. This species is a scarce (just about annual) early spring and late autumn migrant in Øygarden.
A Brambling bjørkefink also joined the usual visitors and fed alongside the Lesser Redpolls brunsisk.
Posted by Jules at 8:00 pm 0 comments 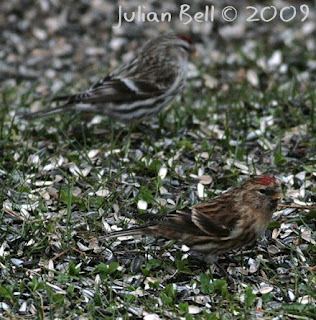 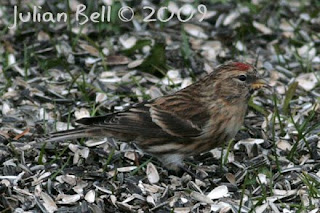 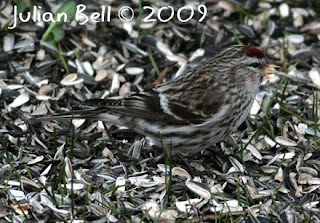 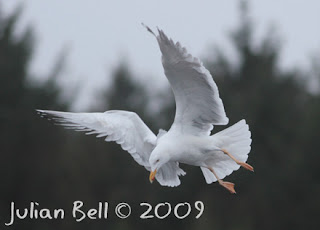 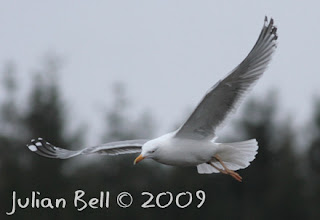 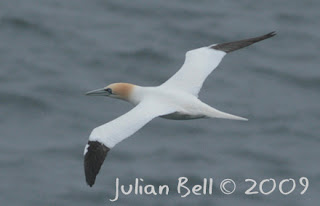 Spent the morning at Skogsøy where there was a reasonable amount of passage with 104 Curlew storspove and seven Red-throated Diver smålom as the best birds. A Puffin lunde was the first of the year and rather alarmingly was one of only two auks today.

Back at Tjeldstø some interesting Herring Gulls gråmåke with yellow legs were an unusual find and got the hopes up briefly. The Mealy Redpoll gråsisik was joined by at least one more Mealy and two Lesser Redpoll brunsisk - it is not often I see these species together like this. A flock of over 200 Starling stær fed in the fields beside the house.
Posted by Jules at 8:57 pm 0 comments