A quick trip to Solberg on 23.02 produced a Lapwing vipe resting out on one of the islands, a Curlew storspove and a flock of around 50 Purple Sandpipers fjæreplytt as well as Long-tailed Ducks havelle, White-tailed Eagle havørn etc.

On 24.02 the usual stroll at Herdlevær was generally rather quiet but a Little Grebe dvergdykker put in a short appearance and I saw my first Oystercatcher tjeld of the year - though the first in Øygarden were seen several days ago. A flock of six Greylags grågås were at Breivik.

I popped in at several places on 25.02. First up was a check for the Iceland Gull grønlandsmåke but there was no sign of it and there were generally few gulls there. A Goshawk hønsehauk at Breivik may well have been trying for some of the thrushes that are still about, though it could well have had an eye on the seven Greylag grågås present today. A Water Rail vannriske at Tjeldstø was the best sighting of the day and a pair of Greylags grågås wandered about on the frozen surface of Husvatnet.

Dåvøy was quieter than usual on the sea but three Snipe enkeltbekkasin and five Purple Sandpipers fjæreplytt were present.

I was out of the house for about 45 minutes all in today and thought I would check if any more geese had arrived after yesterday's Greylag grågås arrival. I found four albifrons Whitefronts tundragås at Breivik but that was it - probably the same birds I have seen in the area for the last week or so. 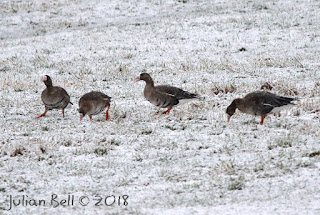 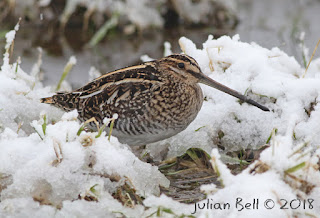 A cooperative Snipe enkeltbakkasin was another of the sightings today

Of late I have been using my spare time for fishing rather than birding, landing some decent Cod torsk to 4kg, Halibut kveite, Ling lange, Coalfish sei and Pollack lyr. Despite eating fish almost every day the freezer is full.

Today I took a very short walk at Tjeldstø where I had two more new species to the Øygarden year list- Best bird was a Jack Snipe kvartbekkasin which was something of a surprise given the conditions. Although quite a regular species out here during the winter months they can be hard to find when conditions are good for them - and now it seems there is plenty of boggy ground to choose from. A small flock of Greylags grågås may have been early returning migrants as they were on the most popular breeding sites rather than the fields that tend to be used by visiting geese. Eight Whoopers sangsvane, small flocks of Redwing rødvingetrost and a Rock Pipit skjærpiplerke were among the other stuff seen here.

An equally quick look at Solberg gave a small flock of Purple Sandpipers fjæreplytt, a couple of White-tailed Eagle havørn, a Gannet havsule , around 25 Long-tailed Duck havelle and another Greylag grågås..

Overcast with light snow at times.

Today I chose Ono, near Rong for today's excursion. This locality can often be rather quiet but has a record of turning up some half-decent winter birds that can be hard to find elsewhere.

I walked out seeing very little indeed with just a couple of White-tailed Eagles havørn, a small flock of Long-tailed Duck havelle , an unidentified large falcon and a Gannet havsule for my troubles. I headed back to the car having played the joker and lost - or so I thought until I caught sight of a Little Grebe dvergdykker on the sea. The joker came good after all.
Posted by Jules at 8:49 pm 0 comments 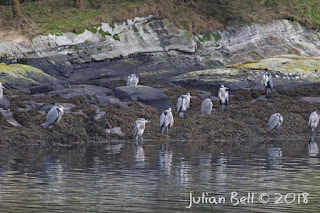 Herons gråhegre roosting at Dåvøy - picture taken whilst waiting for Mergansers to resurface. 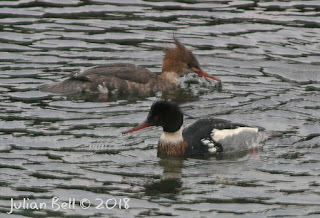 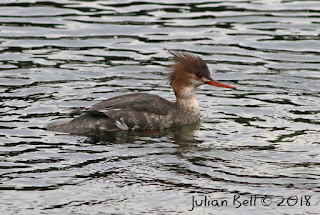 Red-breasted Mergansers siland.
I don't often bother taking pictures of this common species but they are really cool. The females remind me somehow of my misspent youth at the Mayfair Rock nightclub in Newcastle back in the '80s. Kind of reminds me of how the rock girls looked.... 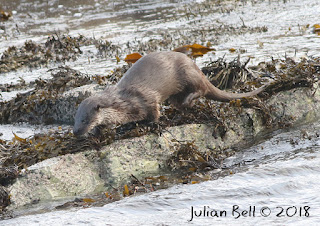 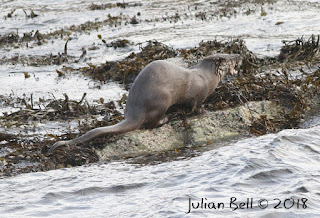 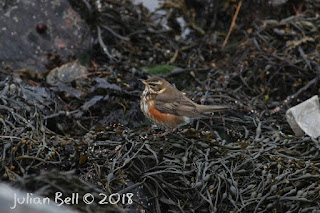 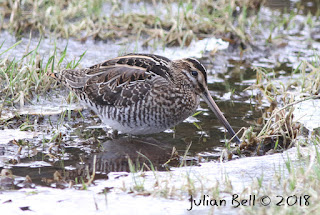 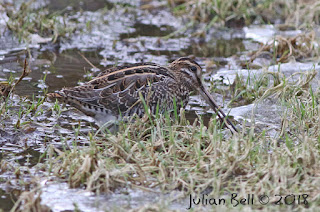 One of a few Snipe enkeltbekkasin seen today. This one at least seemed to be finding some food. Bring on the thaw that hopefully is just around the corner. That way they can find food more easily and get away from the local cats who are now routinely patrolling such areas. I miss my dog. 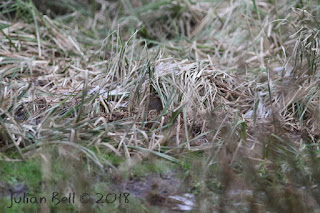 It really should not be possible to spot this Water Rail vannrikse from a moving vehicle. 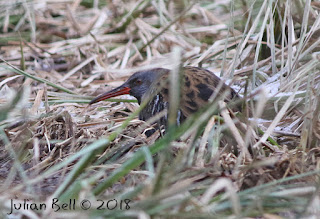 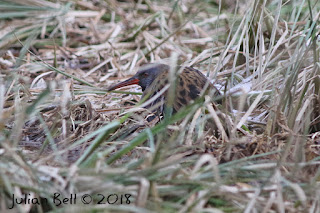 With a bit of patience and a little cropping this was the result.


Todays's very brief foray away from the home office was to Dåvøy. Here it was very much situation normal with a Slavonian Grebe horndykker on the sea, a small flock of Purple Sandpipers fjæreplytt, a White-tailed Eagle havørn or two, a few Parrot Crossbill furukorsnebb and most of the usual suspects including a feeding Otter.

Other stuff today included a few Snipe enkeltbekkasin (thank you to the road work people for stopping me from driving to my house for 15 minutes) and a Water Rail vannriske. I really should not be allowed to drive a car as it cannot possibly be safe to spot stuff like this from a moving vehicle if one is paying any attention to the road. 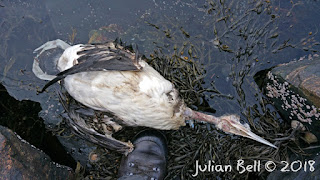 A more saddening observation was also at Dåvøy. Whilst photographing the Red-breasted Mergansers siland I noticed a dead diver floating in the sea. I went down to investigate and it was, as expected, a Great Northern Diver islom. Likely cause of death: drowning in fishing gear. This is the the second Great Northern Diver that I know has died this way since the New Year and it is pure luck that I know even this much. With the apparent policy of building as many marinas and cabins to get yet more people out hobby fishing with nets as humanely possible in addition to those who do this as a way of life there is no way this problem is going to go away.....With the current spate of good weather the amount of gear currently deployed has increased....

Another calm and sunny day - although I have been making the most of the good weather by staying inside and going through pictures from Bhutan...Birding is just too easy when the weather is so good.

Instead of pictures of the birds I saw today I am posting some I saw back in November in Bhutan. 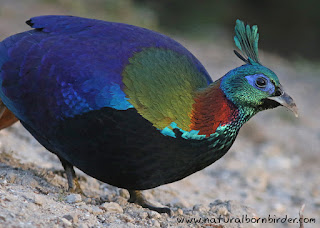 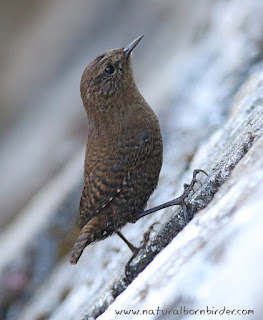 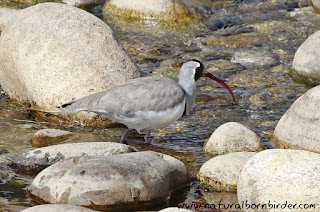 
More pictures and details from Bhutan are now available here.
Posted by Jules at 3:31 pm 0 comments 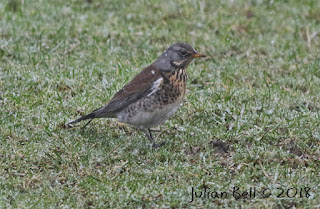 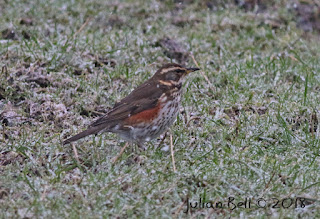 Part of the Fieldfare gråtrost flock feeding in the snow 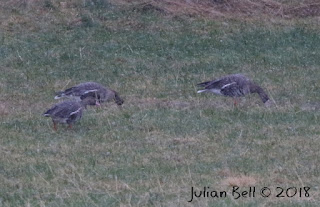 
Rain and snow on the last day of January combined with a heavy workload meant I limited things to a drive-by at Tjeldstø. Plenty of thrushes feeding in the fields and four albifrons Whitefront tundragås at Harkestad were pretty much the only sightings. 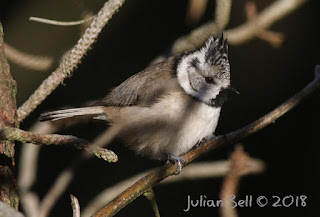 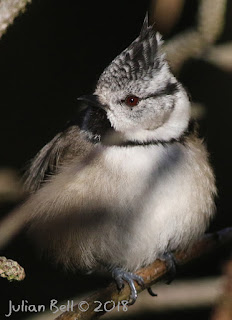 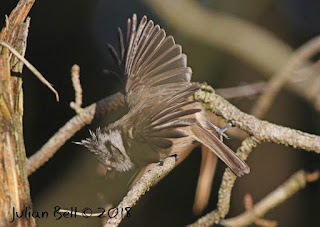 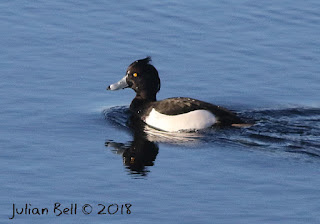 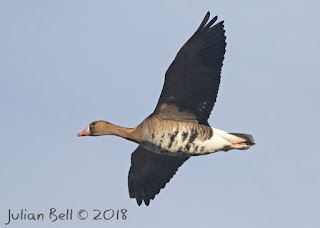 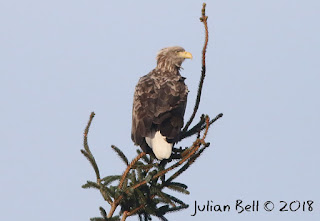 
February started with very nice conditions indeed - calm and sunny with some frost. A quick trip out to Hjelme Vest produced pretty much the usual with a few Great Northern Divers islom, a couple of Kittiwake krykkje feeding, a few Black Guillemots teist and several White-tailed Eagles havørn among the sightings. Long-tailed Duck havelle now up to more than 40 birds - pathetic numbers compared to relatively few years ago.

An aythya duck at Husvatnet fooled me for a while and needed closer inspection - it turned out to be a Tufted Duck toppand. However, the effort was not wasted as some Whitefronts tundragås flew in right over my head. 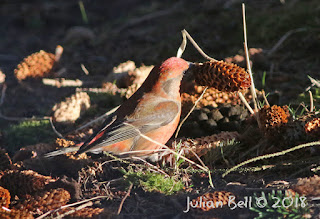 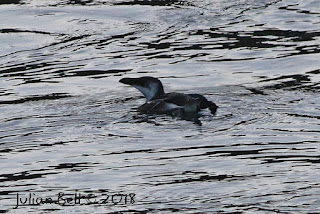 A quick walk at Skogsøy in stunning conditions on 2nd February gave little out of the ordinary - at least three White-tailed Eagle havørn, a Great Northern Diver islom and a massive eight Gannet havsule heading north. A Razorbill alke was feeding close in and some Parrot Crossbills furukorsnebb put in an appearance.
Posted by Jules at 3:54 pm 0 comments