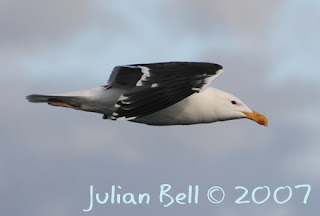 At last! Finally some time spent actually out birding. Paid off nicely in the form of a single Manx Shearwater havlire. July is the peak time to see this rare visitor to these parts - see here for more details. Another good record was a Sooty Shearwater grålire - my earliest ever at Skogsøy. This species has been reported very early at other locations in Europe this year.
Other birds of interest included three Ruddy Turnstone steinvender and a Red-throated Diver smålom. Only a few Northern Fulmar havhest, 66 Gannet havsule and 14 Black-legged Kittiwake krykkje.
One interesting thing today were Gannets havsule REALLY struggling to swallow Garfish horngjel of up to 0.7m in length! The fish were only fractionally shorter than the length of a gannet's wing. These fish were the source of some amazing battles between Gannets and Great Black.backed Gulls svartbak. The Gannets won - but only just! 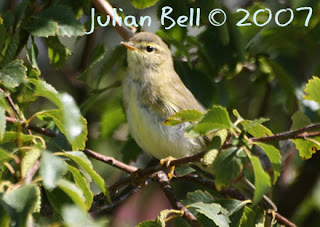 Despite strong onshore winds a short seawatch around lunchtime produced little of interest. A Great Skua storjo headed north and nine southbound summer plumaged Dunlin myrsnipe were the only birds of note.
Posted by Jules at 4:11 pm 1 comments

An early morning walk through the reserve produced some birds with the best being a male Merlin dvergfalk being chased by over 20 Barn Swallows låvsvale, a Ringed Plover sandlo and an Arctic Skua tyvjo riding on a piece of driftwood out in the fjord.
Posted by Jules at 10:13 am 0 comments

Not birding at all. Again. However, as is often the case such days can produce interesting stuff. A male Ruff brushane, complete with "collar" beside Husvatnet was the best bird and a Merlin dvergfalk flew over during a trip to the shops.
Posted by Jules at 9:14 pm 0 comments