Yet another day of what normal people would consider cracking weather - calm, warm and sunny. 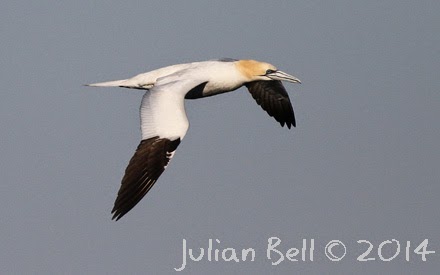 Some of the Gannets havsule passed at close range today 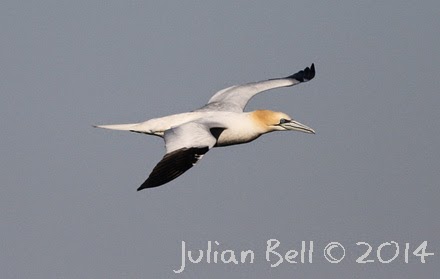 Not enough wind to make for a great day's seawatching but it was still well worth the effort. Highlight was without doubt the first summer plumaged White-billed Diver gulnebblom migrating north - well worth the wait as always! The mainstay of today's migration were some 79 Red-throated Diver smålom. Small numbers of the usual suspects also passed.

On the sea a few Guillemots lomvi and a couple of Puffins lunde were present.

A migrating Willow Warbler løvsanger stopped to feed on the cliff tops shortly after dawn - first of the year for me. Other migrants included a migrating Swallow låvesvale, singing Chiff-chaff gransanger, a few Twite bergirisk and several Linnet tornirisk. A fair number of passerines seemed to come in off the sea - mostly too far off to be identified but many were White Wagtails linerle.
Posted by Jules at 4:43 pm 0 comments

Another day of constant sunshine and little wind - though a light northerly picked up in the afternoon.

A surprise new for Øygarden for me this year was a flock of eight Wigeon brunnakke on the sea at Hjelme Vest. A Great Northern Diver islom feeding offshore was the best of the rest which included about 20 Purple Sandpiper fjæreplytt and a decent passage of Red-throated Diver smålom. 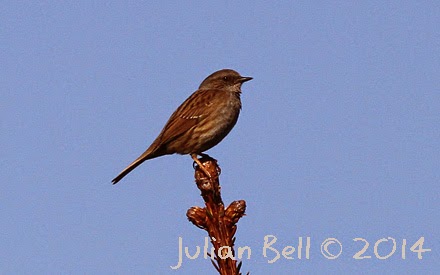 Dunnock jernspurv in the garden


Back home three Twite bergirisk fed at the feeder, a Wheatear steinsvett turned up in the garden and there was some passage overhead which included Siskin grønnsisik and Swallow låvesvale
Posted by Jules at 2:02 pm 0 comments 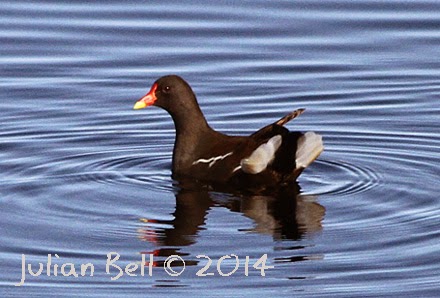 
Highlight was a Moorehen sivhøne on Husvatnet - a barely annual species in Øygarden but mid April at Tjeldstø is the time and place to get this bird. 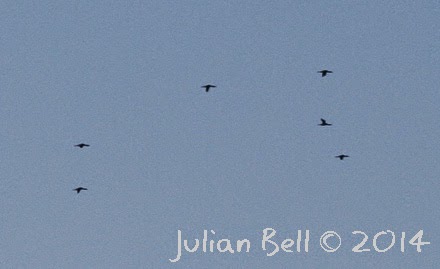 
An hours seawatching at Skogsøy between 1200-1300 showed that there was a fair bit of migration today. A total of 45 Red-throated Diver smålom and 66 Common Scoter svartand headed north along with small numbers of Common Gull fiskemåke and Black-headed Gull hettemåke. 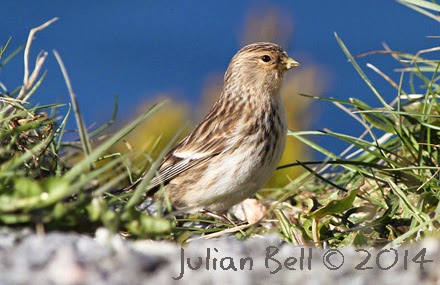 Twite bergirisk in the garden 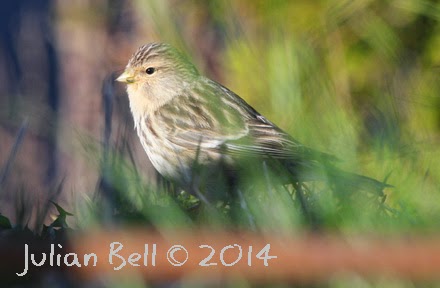 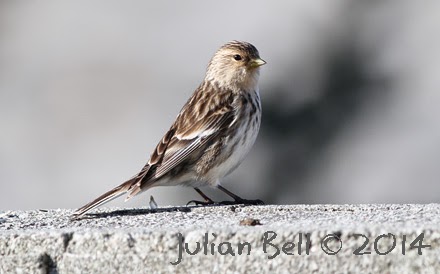 Grilling in the garden at Nautnes in the afternoon gave superb views of a couple of Twite bergirisk - the first time I have ever seen this species at a feeder and another new for the house list.
Posted by Jules at 11:54 am 0 comments 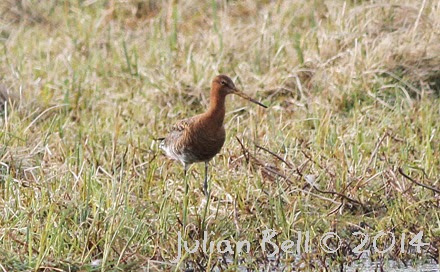 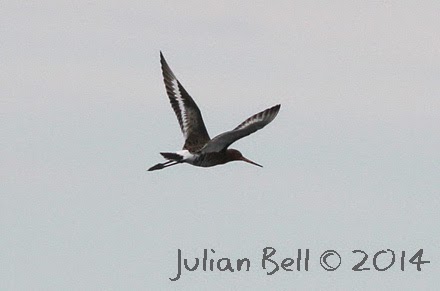 Not out at all but a drive-by at Tjeldstø produced a nice Black-tailed Godwit svarthalespove feeding at Husvatnet where the pair of Tufted Duck toppand was still present.

In the evening the first Swallow låvesvale flew over the house at Nautnes.
Posted by Jules at 12:08 am 0 comments

Back to sunny weather again but no time to be out and about.

A singing Wheatear steinskvett at Tjeldstø was the first a this locality this year. 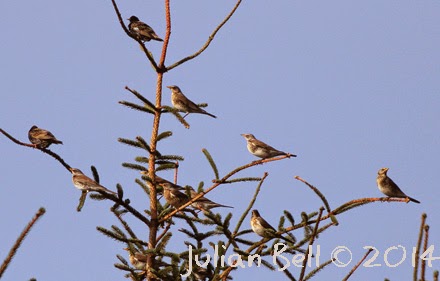 
At Breivik the Pinkfoot kortnebbgås remained in the "usual" place and there were good numbers of Fieldfare gråtrost and Starling stær present - perhaps hangers on after yesterday's movement.
Posted by Jules at 12:31 pm 0 comments

Walked around the reserve and picked up a Reed Bunting sivspurv - the first of the year and a bird I thought I had heard several days ago...nice to get it confirmed.

The feature of the day was a good movement of thrushes with hundreds of Fieldfare gråtrost and Starling stær both moving through and feeding in the fields. Some tens of Redwing rødvingetrost and Blackbird svarttrost too.

A drive-by at Kollsnes produced a singing Skylark sanglerke - another species I have probably heard over the last week or so but always drowned out by other calls and songs.
Posted by Jules at 12:29 pm 0 comments

Overcast with light drizzle at times

Didn't get out for any meaningful birding today. Thankfully others did and the first Ring Ousel ringtrost was reported as well as a Mistle Thrush duetrost.

Yesterday's afternoon high tide brought the corpse of a Greylag grågås floating past the house - I "had to" find out more and dragged the body ashore - with no head and a hole in it's guts I thought that a raptor had killed this bird and that the tide had floated the goose off wherever it was being eaten. 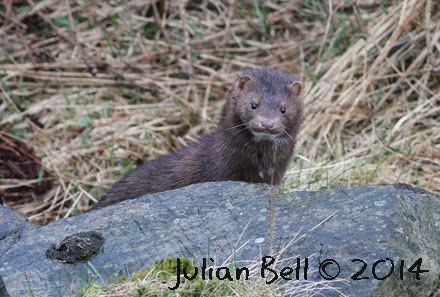 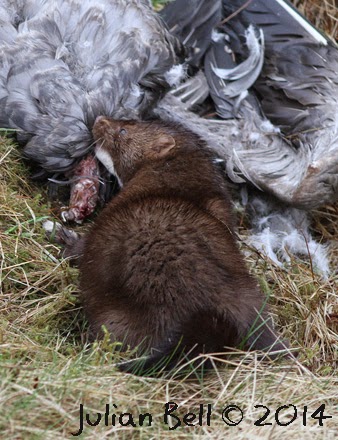 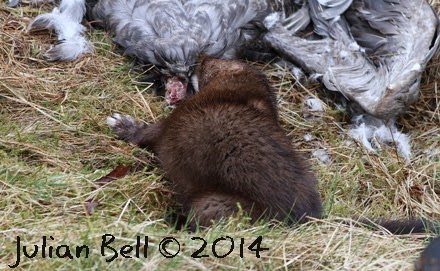 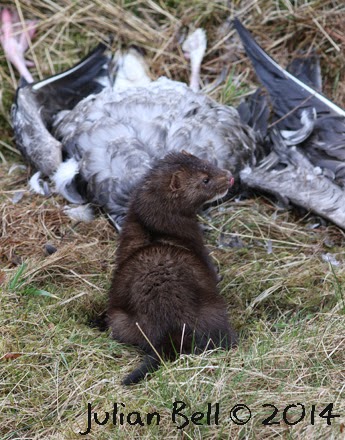 Today a Mink found the corpse - providing entertainment for the girls. For once I didn't set the dog on it. Mink are unfortunately still very common on Øygarden - despite the fact that my dog kills them regularly. I might wait until it gets even tamer before letting the dog do his worst but only after dragging the corpse further away from the sea so that the dog's chances are increased....

Email ThisBlogThis!Share to TwitterShare to FacebookShare to Pinterest
Labels: mink

Light southerlies and sunny yet again.

A superb morning out. The intention was to get to Herdlevær and do a short seawatch in case there was any northward movement of stuff today. On the way there a couple of Redshank rødstilk at Tjeldstø were the first of the year in Øygarden and a Pinkfoot kortnebbgås at Breivik was the first I've seen here this year.

There was virtually no passage whatsoever at Herdlevær - getting there at 0900 was probably way too late in the day. However, all was far from lost with two Great Northern Diver islom together on the sea and a second year Yellow-billed Diver gulnebblom feeding nearby - this bird was at long range for photographs but gave excellent views in the scope. Second year birds like this are not a common sight in Øygarden. 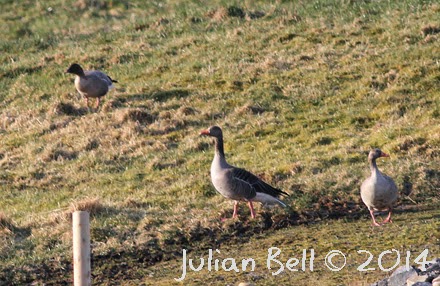 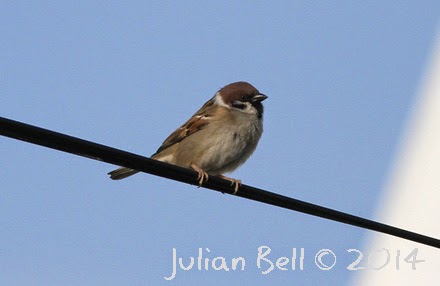 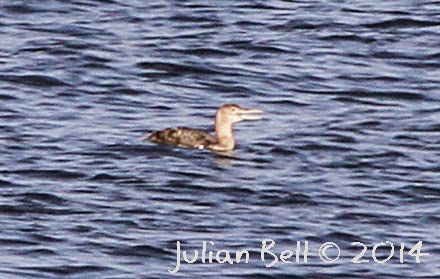 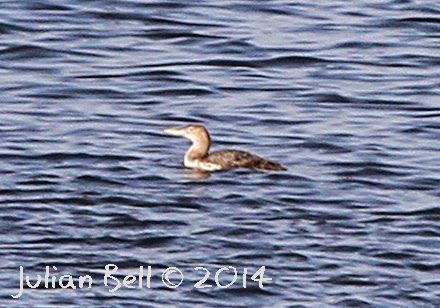 Banana bill, pale neck with little contrast, eye prominent in the pale of the face 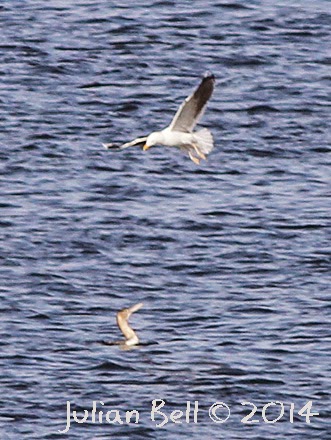 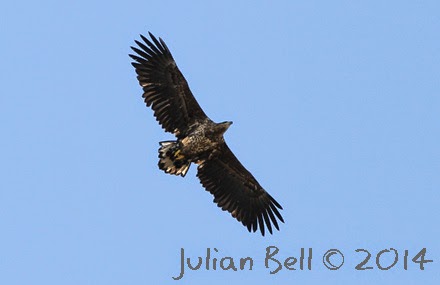 A single Shelduck gravand heading north, another year's first, was almost the only bird that passed. Other stuff included a Guillemot lomvi on the sea, a few Kittiwakes krykkje, Golden Plovers heilo and the usual seaduck.

A few more passerines had arrived since my last visit including a couple of Linnets tornirisk.

With the weather as good as it was today there was never going to be much in the way of grounded migrants but I was rather hoping for some movement overhead. All in all rather quiet but around 30 species seen including a number of the island specialities - Twite bergirisk were very obvious as were at least two male Black Grouse orrfugl - the first I've had in Øygarden this year. 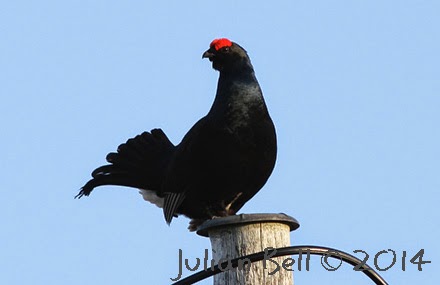 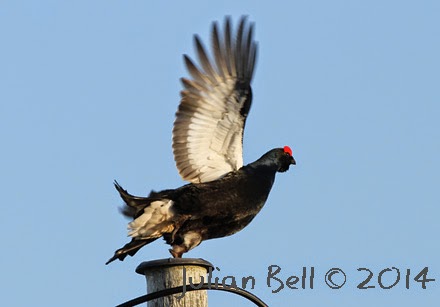 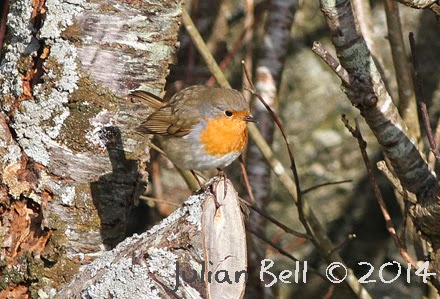 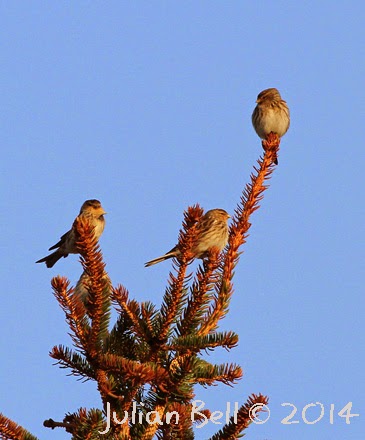 Above and below Twite bergirisk 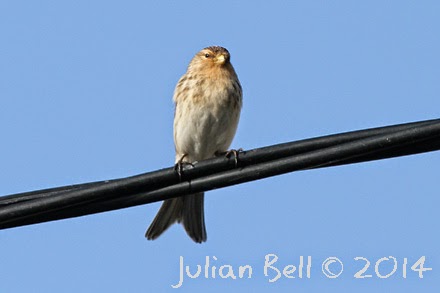 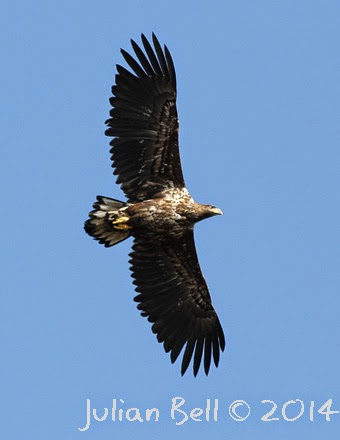 
A handfull each of Robins rødstrupe and Song Thrush måltrost along with a Dunnock jernspurv, a Linnet tornirisk and most of the usual suspects were seen.

News from Hernar included a new boat and timetable. The route is now operated by Gulen Skyssbåt Service. Sadder news was that the island shop has now closed. No chocolate or beer to celebrate good finds anymore! 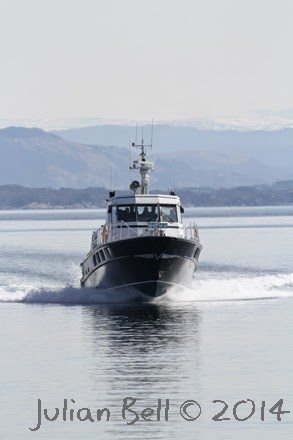 Before leaving the house I had another Black Grouse orrfugl - a new species for Nautnes and for the house list. 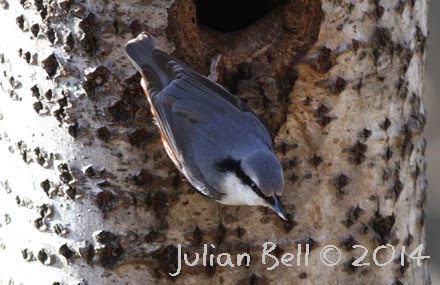 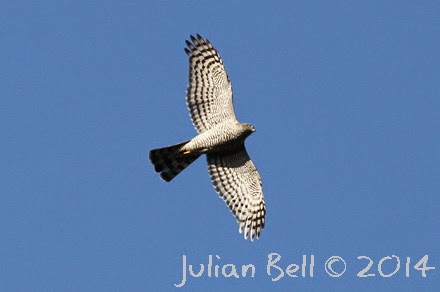 
An evening stroll at Sture produced nice views of a Sparrowhawk spurvehauk and, of rather more interest, a pair of Nuthatch spettmeis nest building.
Posted by Jules at 2:26 pm 0 comments

At last gave the reserve a decent amount of coverage - this paid off quite well with a few more new for Øygarden for me this year - two Mistle Thrush duetrost being the highlights (a few turned up whislt I was last away). A pair of Tufted Duck toppand on Husvatnet and a fly over Linnet tornirisk (first seen in Øygarden yesterday) were the other new stuff.

A minimum of six White-tailed Eagles havørn, 12 Heron gråhegre (the most I have seen at Tjeldstø for some time), a pair of Teal krikkand, at least eight Lapwing vipe, a few Lesser Black-becked Gulls sildemåke and plenty of birdsong from a range of newly arrived species.
Posted by Jules at 5:48 pm 0 comments

Only had time for a quick stroll at Breivik. New birds today were a couple of Twite bergirisk and Golden Plover heilo heard. A male Wheatear steinskvett was also present here.

A general increase in the numbers of other migrants was obvious with more Song Thrush måltrost, Redwing rødvingetrost and Dunnock jernspurv about.
Posted by Jules at 2:20 pm 0 comments