Irruptive woodland species are all well and good - and can make for real rarity value but September is more about more traditional scarcer species.

An hour or so at Sæle around dawn gave two Yellow-browed Warber gulbrynsanger as the best birds. There was generally a lot of birds around including Grey-headed Woodpecker gråspett (typically more obvious at this time of year), a Bullfinch dompap (not a common species out here), a Grey Wagtail vintererle, a few Blackcap munk and plenty of the usual thrushes etc. 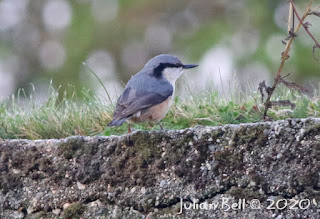 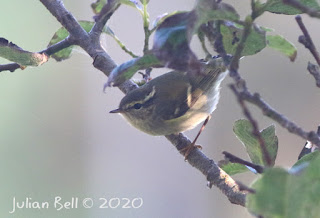 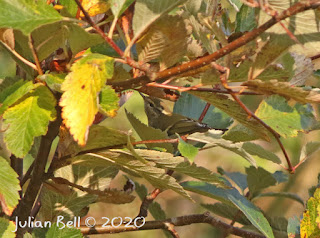 Later in the morning a short walk at Hellesøy gave up another Yellow-browed Warbler gulbrynsanger and a Lesser Whitethroat møller as the highlights. A few minutes at Hjelme gave another Grey-headed Woodpecker.

After a trip to the airport and back I popped in at Herdlevær briefly just as the rain set in - another Yellow-browed Warbler here and a couple of Chiff-chaff gransanger.

The best was saved for the last - my usual stop beside Husvatnet, Tjeldstø where a very flighty Great White Egret egretthegre fed. A Great Black-backed Gull svartbak caused it to fly - but thankfully not far so a couple of the more local birders managed to catch up with it. 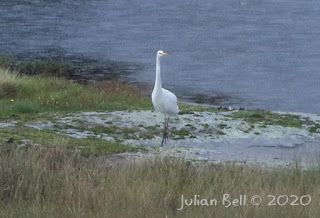 Finally back from work and just about getting out and about.

Small numbers of Blackcap munk, Chiff-chaff gransanger, Goldfinch stillits and so on along with the usual White-tailed Eagle havørn etc the first few days after I returned. 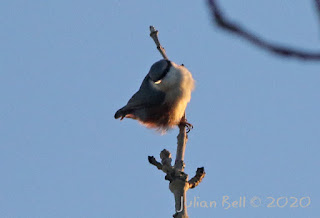 Nuthatch spettmeis at Herdlevær - normally a rather scarce breeding species these are now everywhere - so they are on the move from somewhere else.... 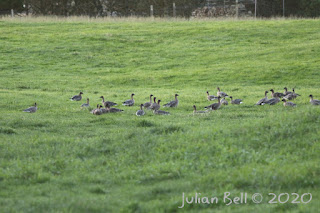 Just part of a flock of Pinkfeet kortnebbgås at Breivik

A short walk at Herdlevær on 27 September before breakfast produced plenty of species normally considered as relatively sedentary with a few Nuthatch spettmeis, a very vocal Lesser Spotted Woodpecker dvergspett, Great Spotted Woodpecker flaggspett and a Grey-headed Woodpecker gråspett. A Jay nøtteskrike also put in an appearance - obviously a lot of woodland species fleeing somewhere north / east of us.

On 24 August the weather was squally and there was generally little passing, a hunting Peregrine vandrefalk and the first couple of Wigeon brunnakke of the autumn were the highlights.

Over 50 Gannet havsule, 85 Oystercatcher tjeld and 25 Golden Plover heilo heading south and small numbers of Knot polarsnipe were among the other sightings in almost 3.5 hours of seawatching. 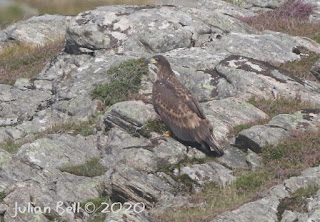 The following day was rather better with nice views of a Manx Shearwater havlire and a Fulmar havhest overhead as the best birds. A Peregrine vandrefalk put in an appearance again and there was a decent movement of Shags toppskarv heading north. Other than that just small numbers of the usual waders including a Turnstone steinvender.

The real highlight was repeated sightings of a massive Tuna fish leaping out of the sea like a dolphin. 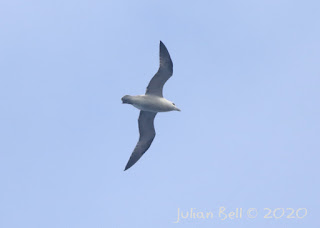 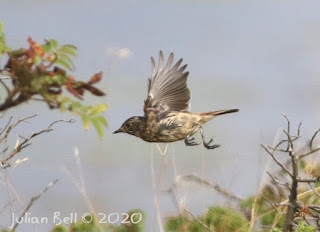 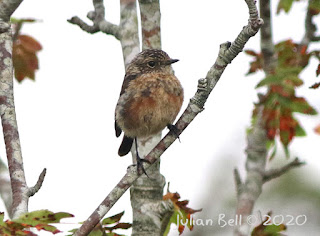 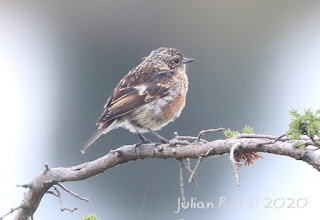