A surprising number of Gannets havsule passed north today during a couple of hours early in the morning with around 80 passing. 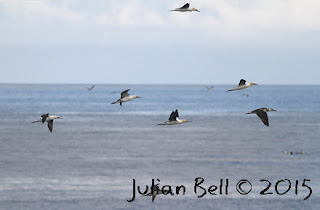 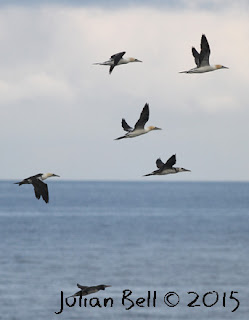 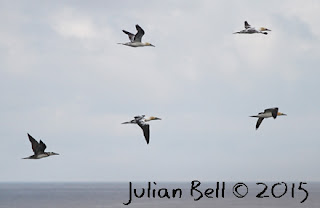 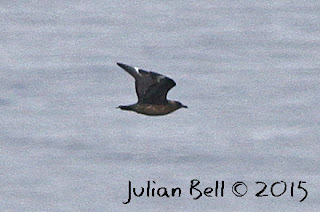 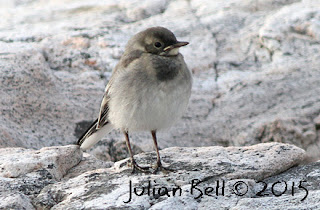 
Otherwise the avian highlights were rather tame - just a Great Skua storjo and the first Black Guillemot teist for some time. A very unusual sighting was a Crested Tit toppmeis feeding on the rocks along the clifftop.

The first Whimbrel småspove of the autumn also headed south along with small numbers of Common Scoter svartand.

However, the best sighting was at least one whale heading north - almost definitely a Minke Whale.

I was not out in any meaningful way yesterday but managed to see an Eagle Owl hubro at one of the usual places.
Posted by Jules at 7:24 pm 0 comments

Spent the day guiding and for once not in Øygarden but instead on a couple of my old stomping grounds nearer Bergen.

Good weather all day - sunny and warm on Gullfjell in the morning and light rain for Herdla in the afternoon. 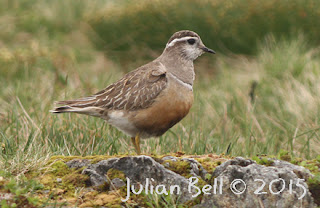 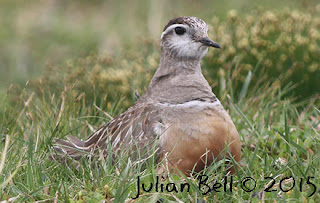 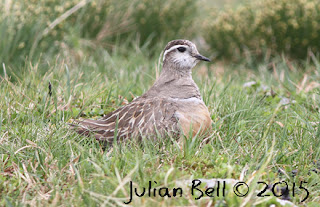 
Gullfjell produced the goods with the highlight being a nice male Dotterel boltit. In a Gullfjell context the best bird for me was a White-tailed Eagle havørn - the first I have seen there. Other stuff included two Rock Ptarmigan fjellrype, a couple of Ring Ousel ringtrost, good numbers of Golden Plover heilo and plenty of Wheatear steinskvett. Looks like the birds are having a good year on Gullfjell with plenty of newly fledged young about. 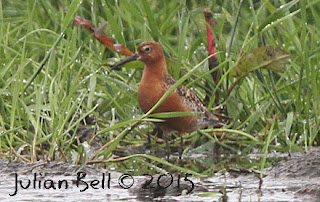 Herdla produced a selection of waders on autumn migration - including a cracking adult summer Curlew Sandpiper tundrasnipe - the first for the county this year.
Posted by Jules at 10:29 pm 0 comments

Light southerlies with drizzle most of the afternoon. 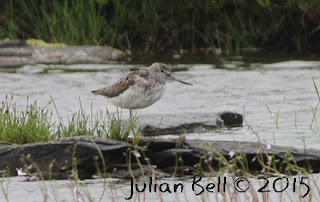 One of two Greenshank gluttsnipe present at Kollsnes this evening

Herdlevær produced nothing other than the usual suspects but a couple of Greenshank gluttsnipe at nearby Kollsnes were the first of the autumn. Elsewhere two Knot polarsnipe were reported.

Other sightings included a couple of Woodcock rugde at Skjold, a Ringed Plover sandlo still at Sture - indicating that the regular breeders are tolerating the disturbance in that area, a couple of House martin taksvale and  the male Wigeon brunnakke were still present at Tjeldstø.
Posted by Jules at 11:31 pm 0 comments

After yesterday's gale force winds I was hoping for some kind of return movement. However, this was not to be. Just small numbers of Gannets havsule, good numbers of Arctic Tern rødnebbterne, at least six Puffin lunde and a couple of Guillemots lomvi were among the birds that passed the lookout point.
Posted by Jules at 11:24 pm 0 comments

Wind increasing to gale force northerly during the day. 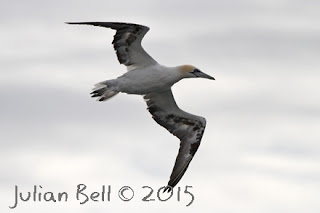 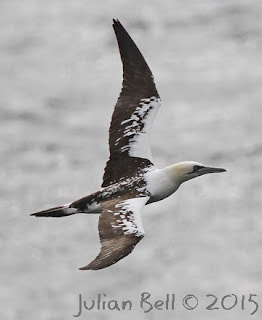 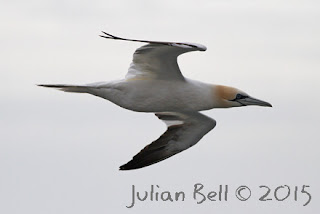 Some of the Gannets havsule today

It was late afternoon before I made it out to the lookout point. The wind was already too strong for most birds. In the course of 1.5 hours approximately 50 Gannets havsule headed south and much smaller numbers struggled north. Several Great Skua storjo also went south along with a small flock of Common Scoter svartand.

Only a couple of Lesser Black-backed Gulls sildemåke and around 10 Arctic Terns rødnebbterne flew north.

A lone Guillemot lomvi fed close in.
Posted by Jules at 10:32 pm 0 comments

Nothing too much out of the ordinary. Highlights were two House Martin taksvale feeding over Husvatnet and a singing Skylark sanglerke out in the reserve.

Plenty of Snipe enkeltbekkasin today but just one Lapwing vipe. 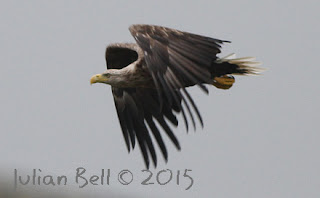 A couple of adult White-tailed Eagles havørn were obviously still think Greylag for the dish of the day...
Posted by Jules at 8:38 pm 0 comments

Given the time of year and the conditions expectations were not that high. One can always hope though and a couple of hours spent seawatching from just before 0600 provided a bit of everything with seabirds, autumn migration and a rarity or two. 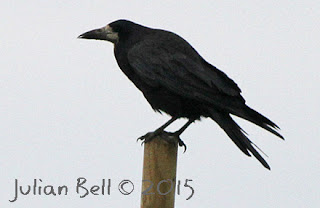 
Highlight was a flock of four Sandwich Terns splitterne heading steadily north - although classed as a county rarity (approx 15 county records, the majority of which are from Øygarden) this species undoubtedly occurs quite regularly - it is more a question of coverage. A Rook kornkråke close to where we park was an unusual July record and is probably the same bird that has been hanging around in Øygarden since the spring.

Autumn migration included 23 Shelduck gravand heading south - including a massive flock of 18.(which was my previous best count). This is the second highest count of this species in Øygarden (and quite possibly the county). Also small numbers of Oystercatcher tjeld on the move along with a single Curlew storspove. 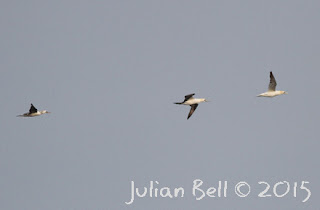 Seabirds were the usual suspects for the time of year and included small numbers of Gannet havssule, a Black Guillemot teist, a single Great Skua storjo and several flocks of Common Scoter svartand. 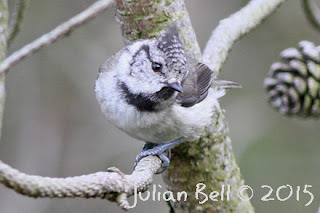 One of several curious Crested Tits toppmeis seen in the woods

Very hot and sunny, thankfully with a breeze from around 10:00.

After pathetically little opportunity to get out and about for what feels like months I finally managed my second visit to Hernar this year.

Highlights were a couple of Swift tårnseiler early on, two House Martins taksvale and a dark phase Arctic Skua tyvjo just as I left the island. 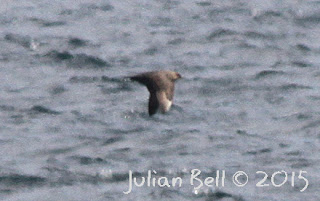 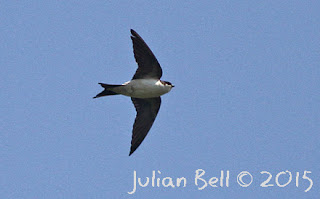 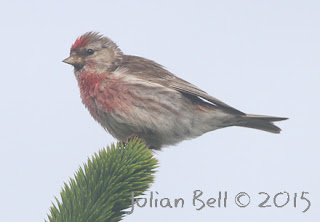 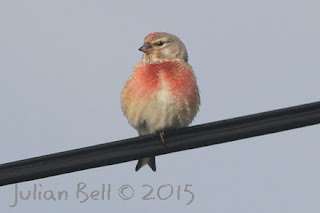 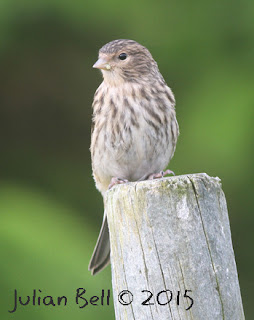 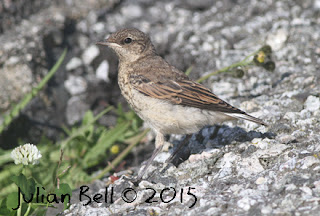