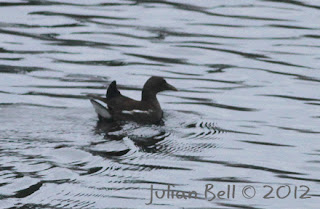 A walk in the woods beside Storevatnet produced little other than a Woodcock rugde.
Posted by Jules at 1:39 pm 0 comments

A quick dash around Herdlevær produced nothing unexpected today. A couple of Black Guillemots teist, a Little Auk alkekonge and a Fieldfare gråtrost were the best of what was on offer.
Posted by Jules at 1:56 pm 0 comments 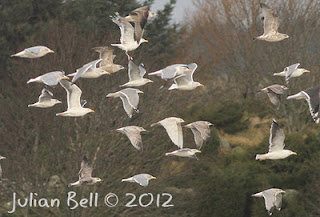 Above and below: record shots of the second year (first winter) Iceland Gull grønlandsmåke 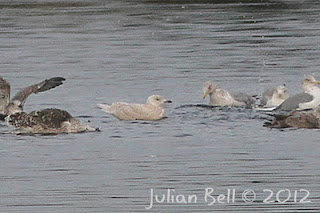 Took things relatively easy today picking up a Kestrel tårnfalk at Ormhilleren, a Curlew storspove and a Puffin lunde at Solberg and a second year Iceland Gull grønlandsmåke at Tjeldstø.

A flock of 60 Common Crossbill grankorsnebb at S. Straumsundet was the biggest flock for some time.

Elsewhere an Eagle Owl hubro gave a single hoot during an hour or so of waiting.
Posted by Jules at 8:11 pm 0 comments

Spent the morning tramping through some pretty heavy terrain seeing very little indeed - but a male Black Grouse orrfugl made it all worthwhile.

A Jackdaw kaie near the "car park" at Skogsøy was the bird of the day and probably the first January record for Øygarden.

A couple of adult Iceland Gulls grønlandsmåke seen from the comfort of my living room provided some additional interest.
Posted by Jules at 1:35 pm 0 comments 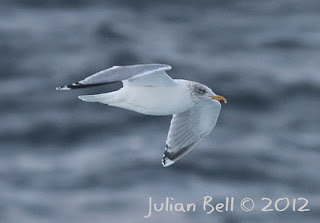 Herring Gull gråmåke at Skogsøy
With strong winds from the north some seawatching was called for. Unfortunately the winds were a bit too strong and there was very little passing. Luckily a Great Northern Diver islom came past struggling into the wind but gave up and turned south again. Otherwise just a few Gannet havsule and small numbers of gulls including a couple of Kittiwake krykkje. 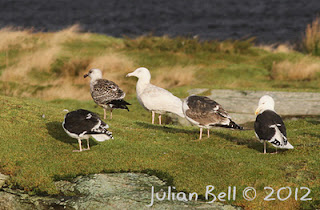 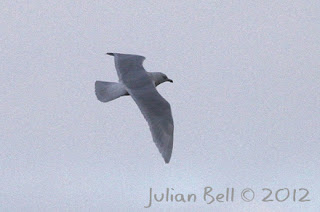 Once again work curtailed the birding but a brief dash out was most productive. 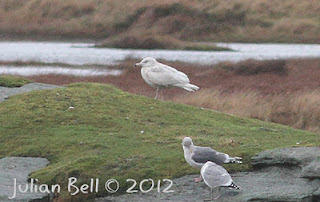 Above and below: heavily cropped record shots of the Glaucous gull polarmåke 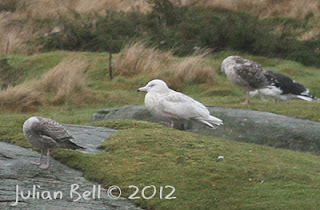 First bird I got onto when I lifted my bins at Tjeldstø was a 3rd year Glaucous Gull polarmåke resting with the other gulls at Husvatnet. Other birds at Tjeldstø included a flock of four Fieldfare gråtrost (first of the year), a Snipe enkeltbekkasin, a pipit piplerke, a few Kittiwake krykkje and the usual flock of 10 Tree Sparrows pilfink. 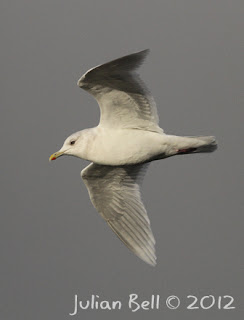 Above and below: Adult Iceland Gull grønlandsmåke 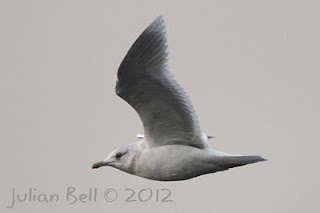 Alvheim was just about dead but produced a nice adult Iceland Gull grønlandsmåke that flew past a couple of times. This is turning into a good winter for this species in Øygarden and the rest of Hordland too. Shetland is also getting more than its fair share of these....
Posted by Jules at 5:25 pm 2 comments

Southerly with heavy rain most of the day.

Work and familiy commitments meant there was virtually no time out and about today. 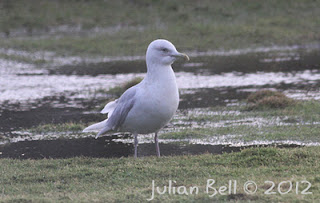 Above and below: record shots of the adult Iceland Gull grønlandsmåke at Breivik 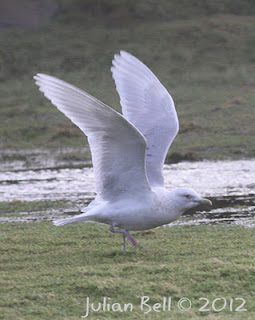 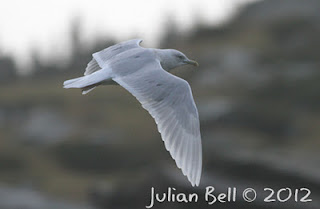 However, picked up the elusive Moorehen sivhøne at Blomvåg during some errands and later in the day a quick stroll at Breivik produced a cracking adult Iceland Gull grønlandsmåke feeding in the fields. Little else seen.
Posted by Jules at 5:15 pm 0 comments

Conflicting weather forecasts yesterday evening meant it was a late snap decision to head to Skogsøy, something that paid off reasonably well.

The onshore winds produced some movement, but some species still not showing. Best bird was an unseasonal Fulmar havhest heading north, two Razorbill alke were also new for the year. Other stuff included 45 adult Kittiwake krykkje heading north, a Puffin lunde, small numbers of Little Auk alkekonge and a couple of Gannets havsule.

Rather little about considering the relatively good conditions. 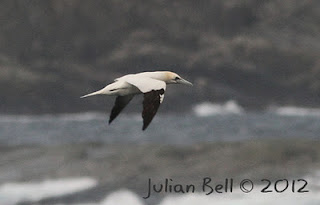 Much the same story pretty much everywhere I went today.

Things were somewhat better at Tjeldstø with a flock of three Greylags grågås the first of the year. Other birds inlcuded a Snipe enkeltbekkasin and a Great-spotted Woodpecker flaggspett. 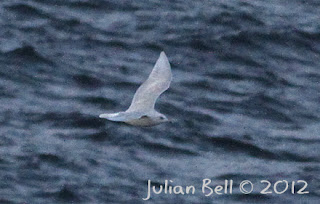 Above and below: record shots of Iceland Gull grønlandsmåke 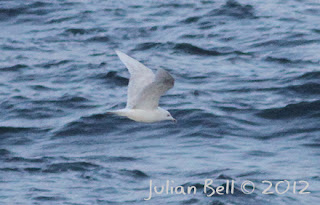 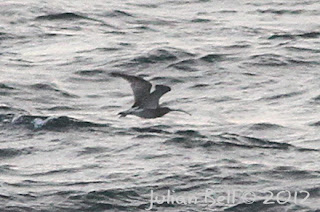 Fantastically long bill on this Curlew storspove - must be a female
Surprisingly pleasant conditions. Sat for a little over 1.5 hours and had a slow but steady trickle of stuff moving north. Most surprising bird was the very first - a Puffin lunde heading north. Not long after this a third year (or perhaps an adult) Iceland Gull grønlandsmåke flew past. An excellent start to the day!

Other stuff on the move were small numbers of Little Auk alkekonge, 14 Kittiwake krykkje, several Gannets havsule and the first Curlew storspove of the year. A Common Gull fiskemåke was a slightly unusual winter bird for Skogsøy.

Looked for the Lesser Scaup purpurhodeand but again it was not to be seen. Looks like it has probably moved on....
Posted by Jules at 2:00 pm 2 comments

Covered a number of localities further south than I usually cover - something that paid off quite well. In the Toftøy area we picked up a Water Rail vannrikse and a female Scaup bergand at the first locality. Water Rail are rather uncommon in winter so this was a good find. A single Redwing rødvingetrost was the first for some time. 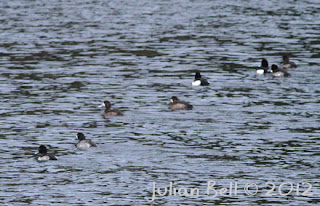 Part of a mixed flock of Scaup bergand and Tufted duck toppand at Nordlavatnet
The next stop, Nordlavatnet, produced four more Scaup bergand together with seven Tufted Duck toppand. A Great-spotted Woodpecker flaggspett was another new species for the year.

After that it was more of the usual fare at the usual spots with an obvious northbound movement of Kittiwake krykkje and a Gannet havsule at Solberg.

At Tjeldstø the nine Bean Geese sædgås were seen on Rotevatnet.
Posted by Jules at 1:56 pm 0 comments

Hjelme Vest was very quiet and it was a struggle to get even some of the usual suspects. A Black Guillemot teist was the best of the stuff on the sea. Crested Tit toppmeis and Wren gjerdesmett were also new for the year.

At Hjelme condtions were little better but I managed to pick up a couple of Woodcock rugde and a Goldcrest fuglekonge.

Alvheim produced a distant Peregrine vandrefalk and another small raptor that escaped identification. Also of interest was a flock of small finches on one of the islands - just like last time I was there. Would be nice to know what they were....

Work and family commitments put something of a brake on the birding today but still managed a few new birds for the brand new year-list. Highlights were a Goshawk hønsehauk and three Common Snipe enkeltbekkasin.

Other new species for the year included a few Rock Pipit skjæprpiplerke.
Posted by Jules at 8:28 pm 0 comments

Took things rather easier today and only saw a few good birds.

Solberg produced just a few Purple Sandpiper fjæreplytt and a Kittiwake krykkje along with most of the usual species.

Tjeldstø produced little for me - just a few each of Common Gull fiskemåke, Black-headed Gull hettemåke, Little Auks alkekonge and a Sparrowhawk spurvehauk. The nine Bean Geese sædgås and a Kestrel tårnfalk were also reported from Tjeldstø
Posted by Jules at 5:34 pm 0 comments