Relatively quiet but a decent variety of stuff passing including the first Red-necked Grebe gråstrupedykker of the year. Other sightings of note were 11 Red-throated Diver smålom and five Brent Geese ringgås. 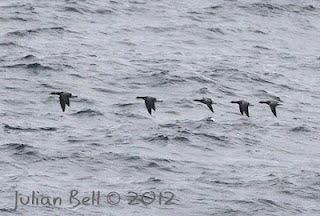 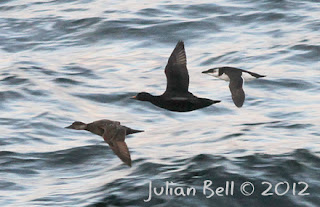 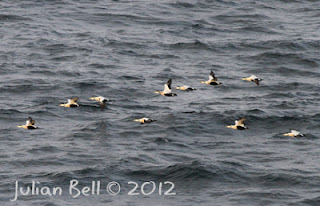 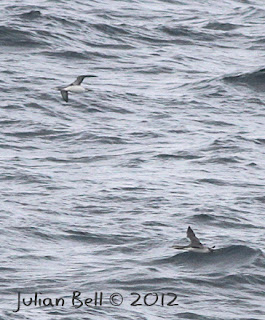 Above and below Red-throated Divers smålom 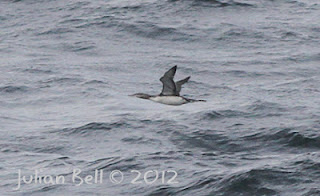 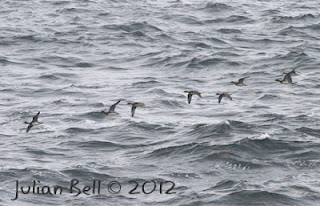 Some passerines also on the move with Meadow Pipits heipiplerke, Rock Pipits skjærpiplerke and a Snow Bunting snøspurv passing over.
Posted by Jules at 2:02 pm 0 comments

Fresh southerlies with light rain, setting in heavier in the afternoon.

A quick check at Husvatnet, Tjeldstø produced some good birds in the form of a female Shoveler skjeand, a  late Ruff brushane and a Merlin dvergfalk.

Moving on to Herdlevær a flyover Richard's Pipit tartarpiplerke was the highlight. Not much in the way of grounded migrants other than a single Snow Bunting snøspurv. Waders included two Oystercatcher tjeld and a Common Sandpiper strandsnipe.

Further south in Øygarden a Yellow-browed Warbler gulbrynsanger was ringed near Toft.
Posted by Jules at 2:29 pm 0 comments

Calm and overcast, some light rain.

Once again restricted to Tjeldstø but still managed to get a few more new for the year: a flock of four Grey Plover tundralo which flew over the garden as I left the house, a rather vocal Grey-headed Woodpecker gråspett out in the reserve and a couple of fly-over Goldfinch stillits.

Otherwise rather quiet in the reserve, just a few each of Snipe enkeltbekkasin, Golden Plover heilo and a Lapwing vipe.

An otter fished in Rotevatnet.
Posted by Jules at 1:38 pm 0 comments

I was obviously not alone in thinking Hernar might produce the goods today with two other birders travelling from town to catch the early morning boat out to the island. 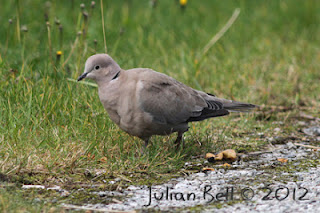 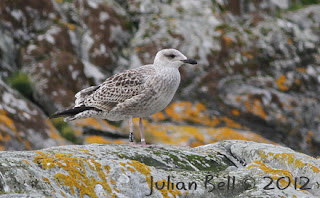 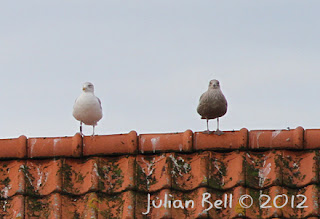 Adult colour-ringed Herring Gull gråmåke (only noticed later when looking at the photo - I was understandably a bit more interested in the right hand bird...) 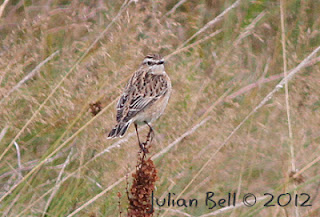 However, things were rather quieter than anticipated. Highlight, if it can be called that, was a new species for the island in the form of a Collared Dove tykerdue - incredibly also the first I've seen in Øygarden this year.
Other migrants included a Common Redstart rødstjert, a few Chiff-chaff gransanger, several Lapland Buntings lappspurv, a Whinchat buskskvett and a couple of Wheatear steinskvett.

A colour ringed Great Black-backed Gull svartbak with number JP954 had been ringed by this gull fanatic.

Plenty of thrushes, Goldcrests fuglekonge and finches about too - including approximately 70 Twite bergirisk.
Posted by Jules at 5:54 pm 0 comments

Movements still restricted so it was the reserve yet again today - resulting in another new for the year in Øygarden in the form of a Grey Wagtail vintererle flying over. 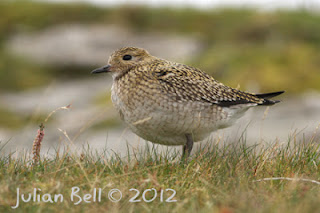 Golden Plover heilo out in the reserve 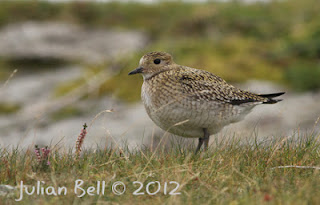 Several small flocks of Golden Plover heilo present today and a mixed flock of waders scared up by a White-tailed Eagle havørn that I did not manage to relocate. Small numbers of Swallows låvesvale, Brambling bjørkefink and other migrants on the move.

Rather promisingly quite a lot of Goldcrest fuglekonge about the last few days.....
Posted by Jules at 1:13 pm 0 comments

Yet another day of calm and sunny weather. Birds seemed thin on the ground and yet there were a few decent sightings in a local context. 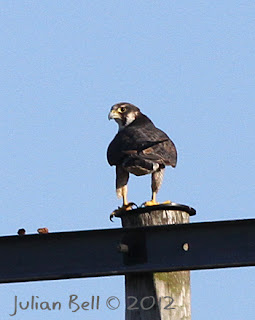 A Nuthatch spettmeis was an unusual sighting as was a rather early (and freshwater) record of Little Grebe dvergdykker.

A Peregrine vandrefalk hunted in the reserve where there were only a few waders - several Common Snipe enkeltbekkasin, a Lapwing vipe, a Golden Plover heilo and Ringed Plover sandlo heard passing over.

A couple of small flocks of Brambling bjørkefink were amazingly the first I've seen in Øygarden this year.
Posted by Jules at 1:01 pm 0 comments

Another day of fantastic weather and few birds. 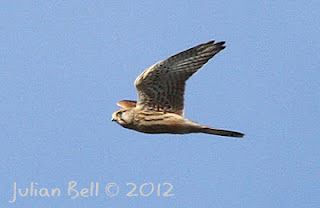 Not much going on with just Kestrel tårnfalk and Sparrowhawk spurvehauk seen migrating. Great-spotted Woodpecker flaggspett, a Reed Bunting sivspurv and a few thrushes were the only other migratnts seen.
Posted by Jules at 12:56 pm 0 comments

In a post on 8th August I mentioned a ring found in an Eagle Owl's nest. I heard back from the BTO and this too was an Oystercatcher tjeld ringed in the UK.

Here is an extract from the report I received from the BTO:

Fantastic clear and sunny weather - much more to my liking than off western Australia from where I have just returned.

A lazy stroll around the reserve produced very little - the ideal migration weather meaning most birds will have cleared off or passed right over. However, after several years of waiting I FINALLY unblocked my Øygarden bogey-bird - Lesser-spotted woodpecker dvergspett. The only previous record for Tjeldstø was nine years ago almost to the day - 21 September 2003. Other records for this species are concentrated in this period with two other records from 20 September.