On 20 August we covered Herdla and some areas closer to Bergen and saw 60 species. Herdla was unsurprisingly the most productive with at least 12 species of wader including Temminck's Stint temminkssnipe, a Wood Sandpiper grønnstilk and a flock of Black-tailed Godwits svathalespove. Passerines included a couple of Yellow Wagtail gulerle and a Lesser Whitethroat møller. We narrowly missed a Citrine Wagtail sitronerle that turned up whilst we were there

Closer to Bergen nine Whinchat buskskvett in one field, a Blackcap munk eating berries already along with another White-tailed Eagle havørn and all three hirundines.

The following day was spent back on the reservation resulting in a better day for the number of species seen and bringing the total up to 86.

The morning started with a couple of Stonechat svartstrupe at Kollsnes. At Herdlevær there was plenty of passage, some of it very close in. A Spotted Redshank sotsnipe flying over was the highlight but there was a good selection of waders (including at least four species not seen on Herdla), two flocks of Shelduck gravand and plenty more besides. 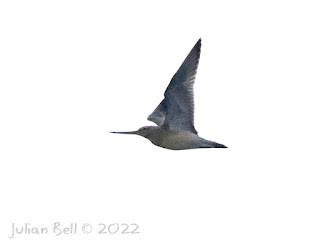 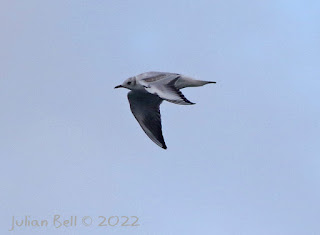 One of a flock of eight Black-headed Gulls hettemåke 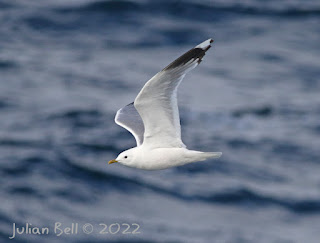 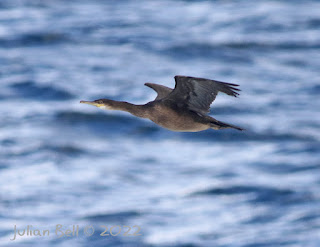 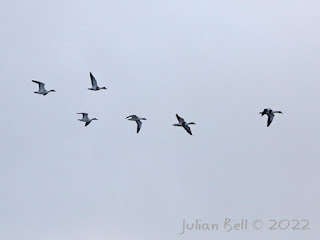 Most of one of the Shelduck gravand flocks that passed

At Tjeldstø both Goshawk hønsehauk and Peregrine vandrefalk put in an appearance along with the summering Whooper Swan sangsvane which was accompanied by three Wigeon brunnakke.

Two happy birders were dropped off in Bergen in the evening😎

Calm and overcast early on, warm and sunny later.

My usual round at Herdlevær produced a reasonable selection of waders including Green Sandpiper skogsnipe, Greenshank gluttsnipe, a flock of 100 Oystercatcher tjeld heading south and a flock of 10 Whimbrel småspove also heading south. A "curlew" in the latter flock was very much smaller than the others but seemed to have pale underwings which rules out at least one of the more exciting candidates.... 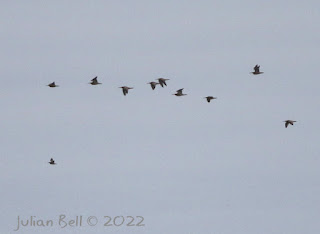 Whimbrel småspove, the bird on the lower left in this photo was remarkably and consistently smaller than the others...

Returning home a first year Green Woodpecker grønnspett was a surprise find a couple of hundred metres from my garden. A new species for this locality where Grey-headed is the normal species to see:) 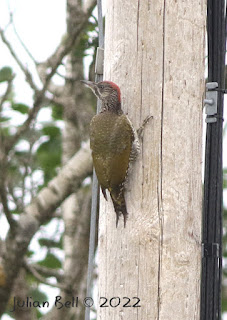 Elsewhere Stonechat svartstrupe, the first Wigeon brunnakke of the autumn, Kestrel tårnfalk and White-tailed Eagle havørn all put in an appearance.

Work and family commitments meant there was even less birding than usual. This period reinforced the idea that I should actually bird more from my terrace. As I barely left the house with my binoculars it was home that gave the best results.

Having been slightly concerned regarding how few White-tailed Eagles havørn are about it was good to see two from the house almost daily - I have seen the eagles eating dead Gannets havsule and the sudden drop in the number of sightings gave some cause for concern.

The Oystercatcher tjeld pair that nested close to my house managed to get one young off as did the Common Sandpipers strandsnipe who seem to have managed at least one, probably two young this year.

I managed a few short seawatches at Skogsøy between 04.08 and 06.08. Oystercatchet tjeld and Common Gull fiskemåke were obviously very much on the move.

On 04 August 457 Oystercatcher tjeld and 377 Common Gull fiskemåke headed south. Other sightings included an Arctic Skua tyvjo and a couple of Red-throated Diver smålom. Of perhaps more interest were a few Tuna and a big pod of White-sided Dolphins - at least 50 fed offshore, possibly several times this number.

On the way home a Pinkfoot kortnebbgås turned up at Harkestand and at Husvatnet a Ruff brushane and a Swift tårnseiler put in an appearance. In the evening a Green Sandpiper skogsnipe flew over the house. 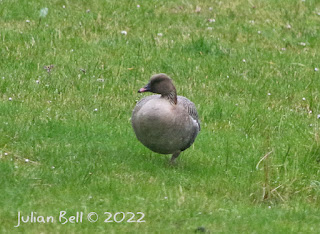 Another seawatch of 05 August produced more of the same albeit in slightly smaller numbers. Other birds included six Shelduck gravand, a Black-headed Gull hettemåke and a Red-throated Diver smålom heading south as well as a hunting Peregrine vandrefalk.

On the way home a Swift tårnseiler was present at Husvatnet along with a couple of Lapwing vipe and a Sand Martin sandsvale. 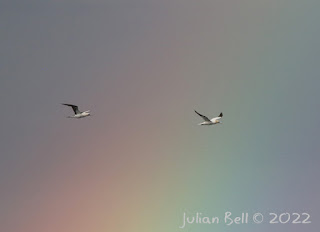 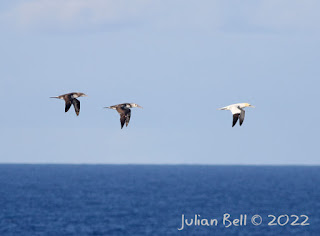 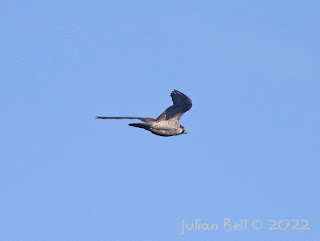 Peregrine vandrefalk
Goldinch stillits were seen at both Tjeldstø and Nautnes, confirming that this speces has established a year-round presence in Øygarden and is no longer just a late autmn migrant and winter visitor.
A shorter seawatch on 06 August gave smaller numbers of the same along with a Fulmar havhest and a single Black Guillemot teist.
Five Tufted Duck toppand which included a number of first year birds may indicate that this species bred on Blomvatnet. 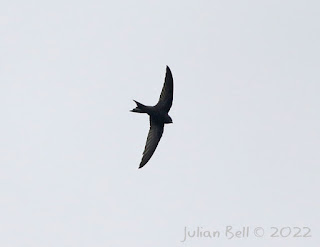 Swift tårnseiler at Tjeldstø
A single Whooper Swan sangsvane remained at Tjeldstø throughout the period - this species is not a usual species during the summer months.
Greylag Goose grågås migration was first noted on 08 August with a flock of 50 heading south during a fishing trip which filled up the bait shelf in my freezer with Mackerell:) A further eight species of fish were caught the following day, thus filling up the rest of my freezer with dinners.
Another guiding trip on 13 August had me leave the reservation again. Getting on for 60 species this time. At Herdla a Temminck's Stint temmeinkssnipe, a Green Sandpiper skosgsnipe, a Wood Sandpiper grønnstilk, a Lesser Spotted Woodpecker dvergspett, 15 Ruff brushane, three Black-tailed Godwit svarthalespove, 60 Snipe enkeltbekkassin, a decent movement of Greylags grågås, a Yellow Wagtail gulerle and plenty more besides.
The lower levels of Gullfjell gave a couple of Kestrel tårnfalk, Sparrowhawk spurvehauk, Willow Tit granmeis and Bullfinches dompap among other things.
On 15 August a calm morning in more ways than one gave the absolute highlight of the period with a female Marsh Harrier sivhauk coming in off the sea a flying past my house at Nautnes. At least two Kestrel tårnfalk and two White-tailed Eagles havørn were also seen along with Bar-tailed Godwit lappspove, flocks of Common Crossbill grankorsnebb, Goldfinch stillits, Nuthatch spettmeis and a light passage of Greylags grågås and Oystercatcher tjeld. 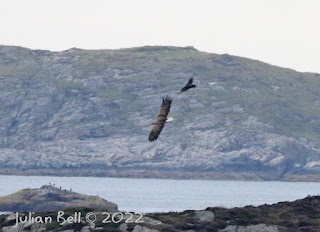 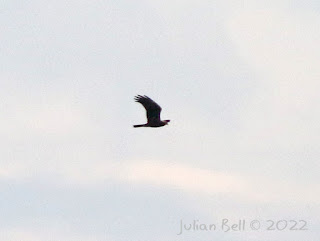 Female Marsh Harrier sivhauk, also from the terrace
The following day some gardening gave me my first local Greenshank gluttsnipe and Great Spotted Woodpecker flaggspett of the year. Whit-tailed Eagle havørn again very obvious and rather vocal from my terrace. 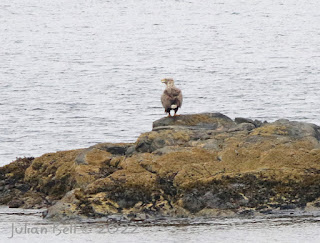 Adult White-tailed Eagle havørn from my terrace
On 17 August a very late and lazy seawatch at Skogsøy gave a single Sooty Shearwater grålire heading north along with 36 Gannets havsule in the space of an hour. On the way home I picked up at least two first year Stonechat svartstrupe, a Whinchat buskskvett, a Wheatear steinskvett and a couple of adult White-tailed Eagles havørn, A flock of 70 Starling stær back home did not contain anything more exciting. 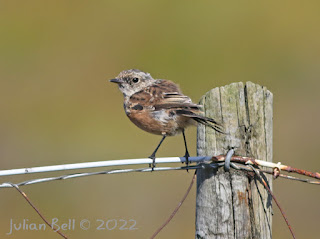 On 30 July, a day of guiding, I went off the reservation for the morning but returned in the afternoon.

At least 46 species noted with a reasonable selection of waders and other species at Herdla along with an Otter feeding on the shore - not something I see much of at this locality.

A couple of unseasonal Tufted Duck toppand and two Peregrines vandrefalk at Husvatnet, Tjeldstø were the best of the sightings.

On 31 July I stayed local as usual. Dunnocks jernspurv suddenly quite obvious, various waders seen including a Green Sandpiper skogsnipe flying over at Herdlevær where there was also a Swift tårnseiler, several Common Sandipiper strandsnipe and a Whimbrel småspove