Did not really have time to go anywhere today but it didn't seem to matter. It has always amazed me how birds appear immediately in decent weather - surely this must mean they were also about during the gales and rain....

A flock of at least 200 Mealy Redpoll gråsisik fed on the abundant pine cones near Trollvatnet - many pale rump to be seen there too but no scope and no time.  Another flock of around 70 flew north over the house - once again there were some white-looking rumps in this flock too.

A Kestrel tårnfalk also flew over the house - a decent midwinter sighting. Other stuff included a Sparrowhawk spurvehauk, a Kittiwake krykkje, a couple of Snipe enkeltbekkasin and some other interesting tracks in the snow.
Posted by Jules at 7:54 pm 0 comments

Winter arrived today with actual snow falling and lying on the ground!

Visibility was reduced during all the hours of daylight as it started snowing just as it got light and stopped as the sun went down.

A short walk at Hjelme Vest produced only a Woodcock rugde and a fly over Redpoll gråsisik of interest.

At Tjeldstø a massive seven Snipe enkeltbekkasin congregated in one small area of open water.

Nautnes probably scored the bird of the day in the form of Pine Grosbeak konglebit but there was only a short call and it wasn't light enough to see anything.-.anywhere else and I would have sworn that this is what is was...
Posted by Jules at 12:22 am 0 comments

Winds still very strong but, just for a change, from the north west instead.

Didn't hang around out at Skogsøy and saw correspondingly little. A Curlew storspove was the best sighting here. A flock of Starling stær were the only other birds of note. 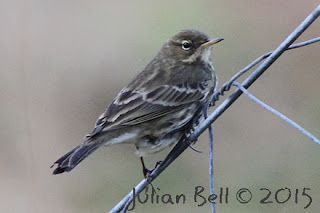 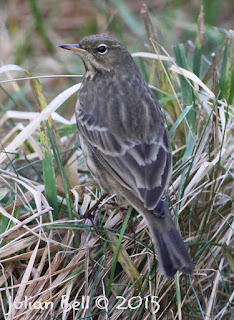 At Breivik a Rock Pipit skjærpiplerke gave very good roadside views and a very unseasonal Meadow Pipit heipiplerke fed in the garden back home at Nautnes.

Winds even stronger than ever - blowing at least 40 knots with rain.

Weather so bad it threatened the space-time continuum and there is every risk that Christmas may be blown or washed into another dimension.

Birdwise the only birds of local interest were a Woodcock rugde and a Snipe enkeltbekkasin - the current conditions must be very favourable for these species.

Still blowing strongly but almost no rain and even some sunshine at one point. 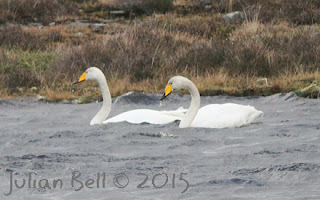 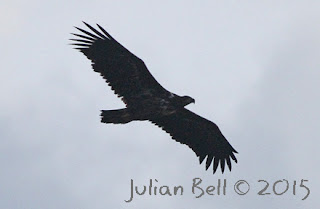 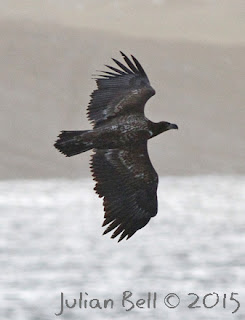 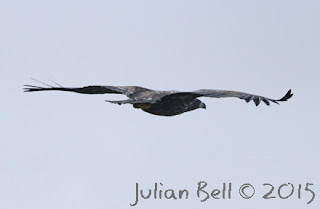 
Solberg produced only a small flock of Long-tailed Duck havelle and a White-tailed Eagle havørn that did a nice fly past. Seems like 23 December is a day for photographing eagles - see last years effort on the same day here.

At Tjeldstø there were six Whoopers sangsvane and the Mallards stokkand that usually accompany them - the swans are invariably followed around by dabbling duck who find their food in whatever gets stirred up by the swans massive feet. An adult White-tailed Eagle havørn came past very close here too - probably just to teach me a lesson for leaving the camera in the car.

The southerly gales persist - but without rain this time.

Just a flying visit here produced relatively little but a Curlew storspove was the first of the winter for me. Otherwise just small numbers of Long-tailed Duck havelle, a single Common Sctoer svartand and a young Gannet havsule of interest.
Posted by Jules at 8:03 pm 0 comments 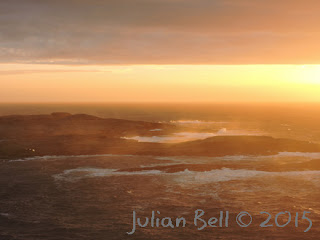 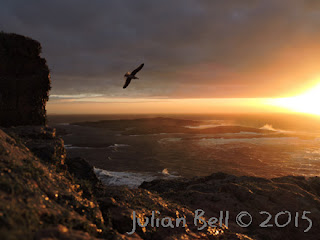 Gale force southerly winds and rain most of the day but went out to Skogsøy in the afternoon anyway - for the walk if nothing else. The weather changed just a we got all the way out and rewarded us with a decent sunset.

Email ThisBlogThis!Share to TwitterShare to FacebookShare to Pinterest
Labels: Skogsøy 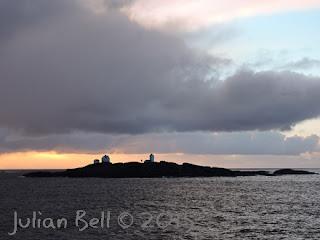 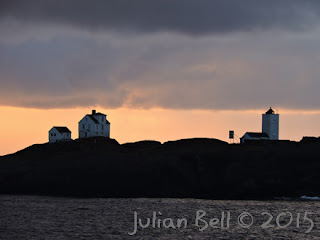 Spent a couple of weeks offshore either in, or close to Øygarden for the vast majority of the time. I saw very little but after darkness there were occasional Fieldfares gråtrost heard flying south and on 16th December a Common Snipe enkeltbekkasin flew around the vessel a few times after dark.

Email ThisBlogThis!Share to TwitterShare to FacebookShare to Pinterest
Labels: Holmengrå

A short trip out "to post Christmas cards" resulted in a few birds I haven't seen for quite a while - two Lapwing vipe at Skogsøy, a couple of Goshawks hønsehauk (an adult VERY full after eating a Herring Gull gråmåke) and a first year bird.

At Tjeldstø the Whooper sangsvane numbers had swelled to nine birds - finally including a single first year bird.
Posted by Jules at 1:17 pm 0 comments

Slightly less windy and sunny most of the short time I was out.

Dåvøy was relatively quiet but a Red-throated Diver smålom on the sea meant it wasn't a waste of time. Other stuff included a Razorbill alke, a Little Auk alkekonge and at least some of the usual suspects.

A Brambling bjørkefink here was the best of the passerines.

The morning school run (with dawn just about breaking) provided a couple of Woodcock rugde flying over the road with one at Skjold and another at Tjeldstø.
Posted by Jules at 11:28 pm 0 comments

No time to get out and about in any meaningful way - beginning to sound like a stuck record on that one.

On 28 November there were four adult Whoopers sangsvane at Tjeldstø and a couple more at Kollnes. That no young birds are present should be ringing some alarm bells. Also at Tjeldstø were a couple of Wigeon brunnakke.

As is often the case the dabbling ducks associated strongly with the Whoopers taking advantage of food stirred up by the massive feet of the swans.

A flock of geese at Breivik made me stomp on the brakes but they turned out to only be Greylags grågås and not any of the more unusual geese as is often the case at this time of year.

Even less time out on 29th so just a few Redwing rødvingetrost here and there and four White-tailed Eagle havørn over the house. The heavy seas were pretty spectacular though... 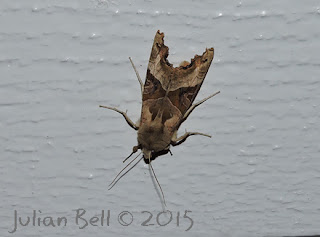 Angle Shades moth taggvingefly - getting late in the year for this kind of thing!