Calm and sunny most of the day.

Spent an hour or so at Hjelme Vest. Here eight Oystercatcher tjeld resting on one of the islands and 12 more heading north were a sure sign of spring. Long-tailed Duck havelle numbers have increased with about 50 present along with smaller numbers of the usual seaduck. Singles of Guillemot lomvi and Black Guillemot teist were also present along with a Peregrine vandrefalk with prey and a flock of 18 Purple Sandpiper fjæreplytt. On land there was not much in the woods other than a flock of 60 Common Redpoll gråsisik.

A drive-by at Sæle produced the first Fieldfare gråtrost I've seen in Øygarden this year and another flock of about 30 Redpoll gråsisik.

A brief stop at Husvatnet, Tjeldstø saw a Lapwing vipe flying over and five Greylag grågås on the lake - both sure signs of spring. A Goshawk hønsehauk upset the local Hoodies kråke here too.
Posted by Jules at 12:51 am 0 comments

South westerly winds with rain during the morning, clearing in the afternoon. 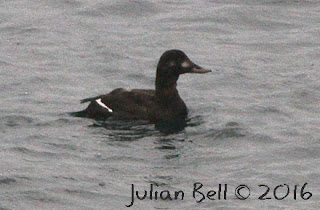 
Took things very easy today. A Velvet Scoter sjøorre in front of the house was unbelievably the first of the year in Øyarden. How it took so long to see this regular winter visitor remains a mystery. 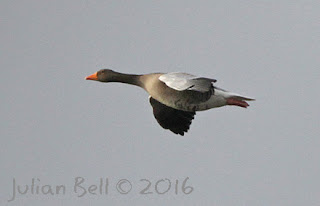 The first Greylag grågås of the year


A quick check at Tjeldstø once again proved quite productive with the first Greylag grågås of the year - possibly confirming the ID of a lone goose seen in flight from the car a few days ago. More White-tailed Eagles havørn here along with a single Razorbill alke on the sea along with singles of Common Gull fiskemåke, Long-tailed Duck havelle and Common Scoter svartand.
Posted by Jules at 3:43 pm 0 comments 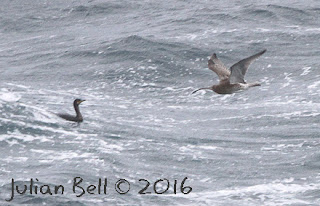 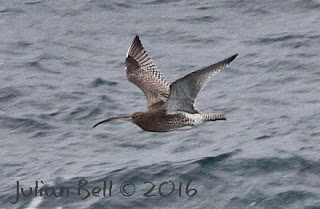 Typically the only rain that fell came whilst trying to seawatch at Skogsøy. Nothing special to report at all - just a Curlew storspove, nine Gannets havsule and a light northward passage of large gulls.A few White-tailed Eagles havørn were almost the only other birds about. 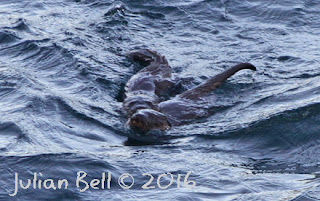 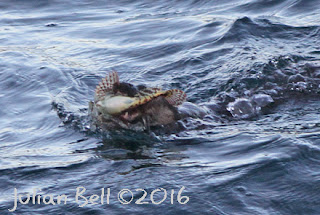 
At Nautnes a couple of young Otters chased after their mother in front of the house - a very common experience but still delightful,

A drive at dusk to pick up my youngest produced a sighting of an Eagle Owl hubro in the top of a tree.

I did Hjelme Vest yesterday seeing very little. A single Purple Sandpiper fjæreplytt was a very poor showing indeed and in common with Skogsøy today very few seaduck about,
Posted by Jules at 11:11 pm 0 comments

Another day of north westerly winds with wintry showers, however mostly sunny whilst I was out.

I decided I had to get out and stretch my legs today and put work on the back burner for a couple of hours. This is something I am already regretting and will continue to do so over the weekend as I try to catch up. 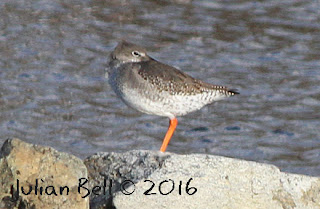 Redshank rødstilk - I can crop an image when I need to!


Besides getting some much needed exercise I also saw quite a few birds, some of them were even interesting. Highlight was a very unseasonal Redshank rødstilk - mirroring a similar recent record further inland in the county. This is the first January record for the area - although there is a record from 31 December 1993 as the only real previous winter sighting.

Another nice experience was the first spring migration of the year - a flock of 30 Guillemots lomvi heading north. Most of the usual stuff was also seen including a Curlew storspove, a Little Auk alkekonge on the sea, a few Gannets havsule, White-tailed Eagle havørn etc.

Almost as rare a sighting as the winter Redshank - I met another birder - at the Skogsøy "parking lot" - here there was a Jackdaw kaie - another new species for the year in Øygarden and a typical winter record for this species.

Managed to squeeze in a short diversion and spent whole half an hour at Dåvøy today - pick of the sightings was the overwintering Slavonian Grebe horndykker. The usual selection of stuff including a Rock Pipit skjærpiplerke getting quite upset about a Sparrowhawk spurvehauk.

Bird of the day was seen from the car whilst continuing with the afternoon school / shop run - a nice Goshawk hønsehauk over the road at Tjeldstø.

Back home a Curlew storspove flew over the house - first I've seen thus far this year at Nautnes, normally this is quite a regular winter bird from the kitchen window.
Posted by Jules at 5:12 pm 0 comments

Southerly winds and rain for most of the day. 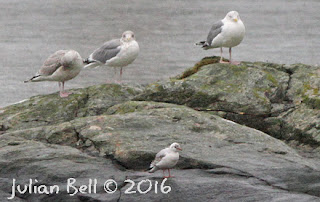 
As ever, not out in any meaningful way. A short breath of fresh air with the dog gave a single Brambling bjørkefink at Breivik and the first Black-headed Gull hettemåke I've seen in Øygarden this year was at Tjeldstø as I popped into the supermarket on the way home.  This latter species is a relatively rare species in Øygarden during the winter.

Crossing fingers about getting out and about later in the week.....
Posted by Jules at 10:40 pm 0 comments

Hardly surprisingly I didn't get out today in any meaningful way. Siskin grønnsisik were the bird of the day with roadside flocks a couple of places whilst I was running errands and another flock in the garden.These birds were actually feeding by the roadside - seemingly on pine seeds that have been released during the recent winds. A few Common Redpoll gråsisik were with them.

Otherwise just a couple of White-tailed Eagle havørn over the house.
Posted by Jules at 8:39 pm 0 comments