On 16 June I did an unusual afternoon trip to Hernar after the morning rain had stopped. Highlights were a Kestrel tårnfalk and a Lesser Whitethroat møller, otherwise very much the usual suspects there. Red-throated Diver smålom were present, both on the sea and heading north. 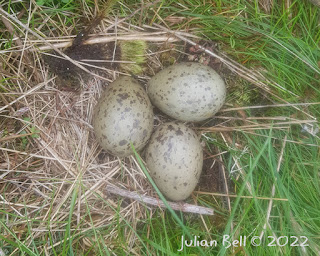 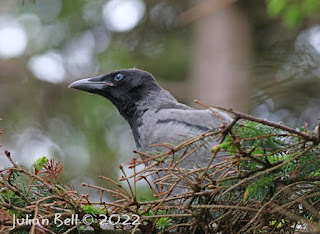 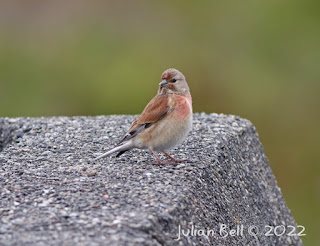 Linnet tornirsik were more numerous than Twite bergirsik today - usually it is the other way around. 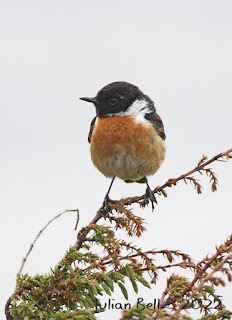 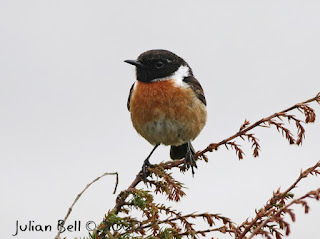 A Stonechat svartstrupe showed well on "mainland" Øygarden earlier in the day.

I FINALLY made it out of the house and away from the computer on 18 June. With fresh onshore winds it had to be Skogsøy:) Best birds were two Manx Shearwater havlire and four Fulmar havhest among the usual Gannets havsule. Three Long-tailed Duck havelle heading north were somewhat unseasonal and a couple of Red-thoated Diver smålom also headed north. A probable Black-browed Albatross svartbrynalbatross headed north - got onto it just too late with a shaky scope but I can't really see what else it could have been. 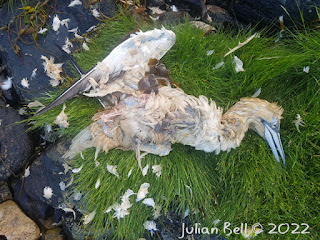 Dead Gannet havsule - a White-tailed Eagle havøn had started eating this bird so I buried it to prevent more carrion eaters gaining access to a probable source of infection....

A White-tailed Eagle havørn fed on a Gannet havsule carcass - no doubt another bird flu victim. So there is a real risk that the local eagles will also be bit by the virus. Two adult White-tailed Eagles havørn also seen from my terrace later in the day.

More of the same really. Stuck at home in front of the computer with work as another dead Gannet havsule floated in....

A video from yesterday showing one of the birds that was collected for testing
....and today's victim - obviously something had been eating it.
Let's just hope the infection does not spread to other species. White-tailed Eagle havørn, Crows kråke, Raven ravn and others may be next .....

An unseasonal Whooper swan sangsvane was again on Rotevatnet, Tjeldstø. Even more unusual was a pair of Whinchat buskskvett at Breivik - in a Norwegian context this species is absurdly rarer as a breeding species than Stonechat svartstrupe in Øygarden!

At Nautnes the usual suspects such as White-tailed Eagle havørn at Otter were seen. A singing Blackcap munk and a Nuthatch spettmeis were more unusual. A Crested Tit toppmeis in my garden was also unusual - although common enough in the surrounding woods this species rarely actually coes into my garden.

Moments after returning home from a trip away my neighbour popped round to inform me about a sick Gannet that had come ashore earlier in the day. Another bird drifted in on the evening tide later in the evening.

It is highly likely that these birds are suffering from avian influensa which has been hitting seabird colonies in the UK and elsewhere pretty hard. I saw some indications of bird flu at some seabird colonies in Iceland a couple of weeks ago. Particularly tragic when one considers all the other issues facing our seabirds these days.

If there are two birds in front of my house goodness knows how many there are along the rest of the coast....

For more info see this link. 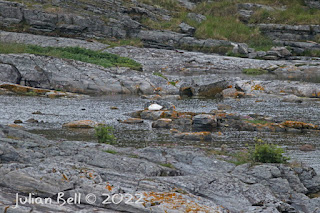 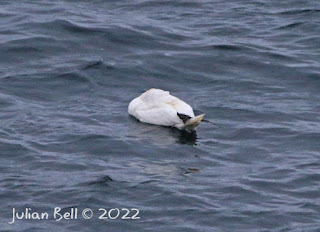 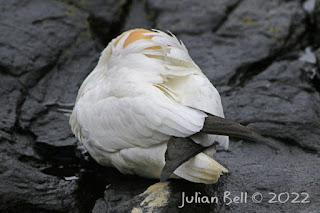 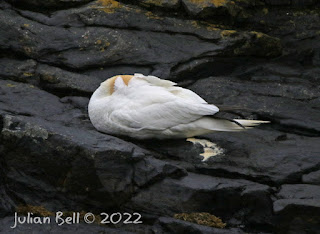