Another cracking day weather wise and thus the island was relatively quiet - but far from dead.  Magic to be out and about - still rather summery with lots of butterflies about too. 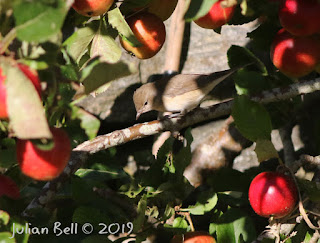 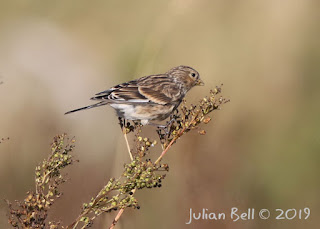 Things were relatively quiet on the island though three species of sylvia warbler all gave nice views. Blackcap munk and Garden Warbler hagesanger were feeding in fruit trees and eating both fruit and insects. A Lesser Whitethroat møller stuck to insects. The only phylloscopus warbler was a lone Yellow-browed gulbrynsanger which called a few times during the morning but never showed itself. Other autumn migrants in the form of Brambling bjørkefink and Reed Bunting sivspurv put in an appearance.

Decent numbers of Song Thrush måltrost were hiding in the trees along with smaller numbers of the other common thrushes.

A Peregrine vandrefalk and a Sparrowhawk spurvehauk hunted over the island. 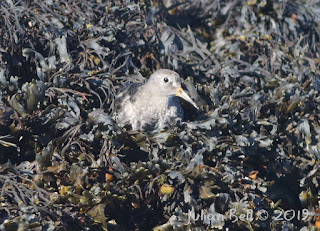 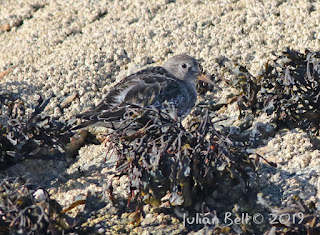 My first Purple Sandpiper fjæreplytt of the autumn showed up on the shoreline as we left the island. Other waders on islands on the way home were Oystercatcher tjeld, Curlew storspove and a few Golden plover heilo.

Had a hour or so actually in Øygarden and therefore had to get out for a quick look.

A brief look at Herdlevær and Breivik produced my first two Yellow-browed Warblers gulbrynsanger of the autumn and a vocal Grey-headed Woodpecker gråspett at Herdlevær. 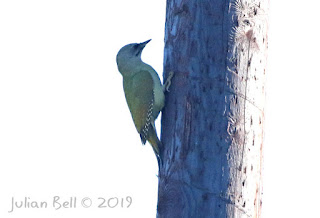 Three Pinkfeet kortnebbgås at Breivik were the best birds there.
Posted by Jules at 7:26 pm 0 comments

In the morning I covered a few localities starting with a failed attempt for the Rosefinch rosenfink at Herdlevær. A Merlin dvergfalk, a few Chiff-chaffs gransanger and an obvious movement of Golden Plover heilo were the among the sightings here. Little of note at Breivik or Tjeldstø either. 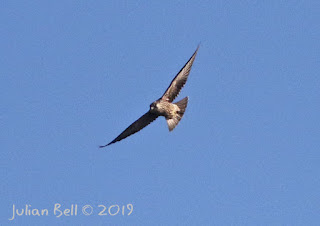 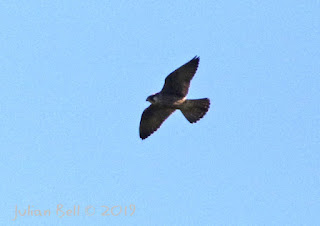 First year Peregrine vandrefalk at Tjeldstø. Another was present at Nautnes later in the afternoon


So I returned home and sat on my terrace for a couple of hours to see what would pass. A Bar-tailed Godwit lappspove was a new for the house and passed together with a flock of Golden plover heilo - 116 of the latter headed south. A couple of White-tailed Eagle havørn, a Peregrine vandrefalk and a Kestrel tårnfalk were the raptors.

Possibly the most interesting sighting was a relatively late Swift tårnseiler which spent the whole time I was outside feeding over the woods with Swallows låvesvale. Most of the usual stuff also put in an appearance with several Gannets havsule, a Rock Pipit skjærpiplerke on the shore in front of the house and a couple of Red-throated Divers smålom.

A flock of 300 Starling stær fed in the area but contained no interesting ones.....

Herdla 02 September 2019 - Off the reservation guiding pays off

Light winds and mostly dry, some sunny spells and a couple of heavy showers.

Another guiding trip to Herdla, the intention was to cover this locality and then move on elsewhere. However, it took all day to cover Herdla properly. There was plenty to see with the undoubted highlight being a first year Citrine Wagtail sitronerle which suddenly turned up but was hard to follow as it chased pipits around. It gave good views in the scope when it appeared out of the grass it was feeding in and called repeatedly in flight. 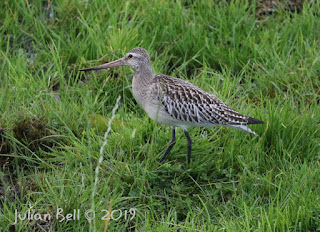 One of the many Bar-tailed Godwits lappspove present 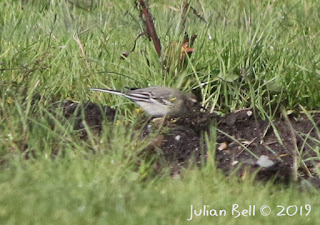 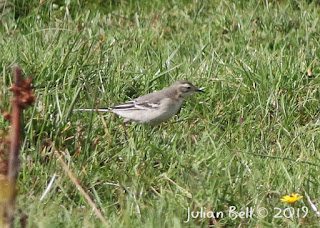 Most features visible in this shot 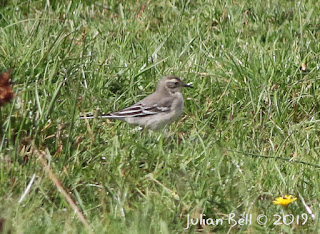 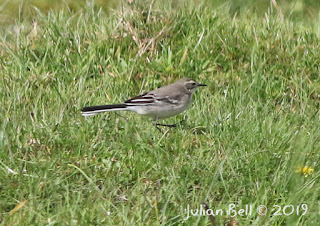 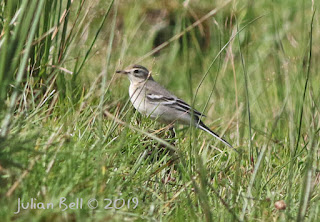 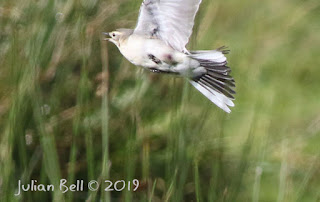 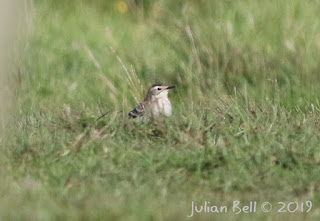 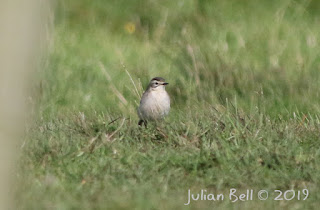 We were also treated to repeated aerial acrobatic displays by two young Peregrines vandrefalk - they seemed just to be playing and did not hunt at all - though there was some evidence that they had been feeding on waders. A few White-tailed Eagles havørn were present on and off throughout the day.

As expected waders were the focus with 14 species including a couple of Little Stint dvergsnipe, two Sanderling sandløper, singles of Knot polarsnipe and Turnstone steinvender and around 25 Bar-tailed Godwits lappspove. By far the most numerous wader was Ringed Plover sandlo. Ruff brushane and Dunlin myrsnipe gave the best views as the fed in the grass.

All in over 50 species so a great day out.

A Nutcracker nøttekråke flying over the road on  the way home was a nice bonus bird!

A relaxing weekend with my daughters - I took things very easy but still managed to get some late and lazy birding in here and there.

On 31 August we did the usual Herdlevær round picking up my first local Bar-tailed Godwit lappspove of the year along with a variety of other waders including Whimbrel småspove, Sanderling sandløper and Turnstone steinvender.

On 01 September I did a short walk at Tjeldstø where the best bird was a Knot polarsnipe (not often seen in the reserve) along with several other species of wader. At least three White-tailed Eagles havørn gave stunning views in the sunshine. An obvious arrival of Wheatear steinskvett was also noted.

In the afternoon I did an hour of seawatching at Skogsøy. Best birds were two Great Skua storjo heading south. Plenty of passage with Common Gulls fiskemåke, Oystercatcher tjeld, Cormorant storskarv and Gannet havsule the most numerous species on the move. Four Red-throated Diver smålom were the first of the autumn for me.

Some waders on the deck here too with an adult Bar-tailed Godwit lappspove, 10 Ruff brushane, a Knot polarsnipe and a Sanderling sandløper among the species.
Posted by Jules at 8:37 am 0 comments