Not out on 04 September but a pod of White-sided Dolphins headed north past the terrace:)

Among other migrants seen from the terrace were Kestrel tårnfalk, Golden Plover heilo, four Sparrowhawk spurvehauk. A breif afternoon stroll at Sæle produced a couple of Great-spotted Woodpecker flaggspett,  a Pied Flyvatcher svarthvitfluesnapper and a Goldfinch stillits.

Didn't even leave the house on 05 September but had a couple of White-tailed Eagle havørn, migrating Golden Plover heilo, Snipe enkeltbekkassin and yet another Great-spotted Woodpecker flaggspett.

On 06 September I did my usual round at Herdlevær, interrupted as usual by an incessant stream of phone calls. Despite this I managed the first Lapland Bunting lappsurv of the autumn, a reasonable selection of waders, several Red-throated Diver smålom and at least six Wheatear steinskvett. 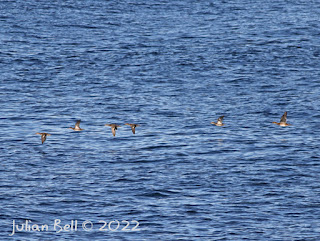 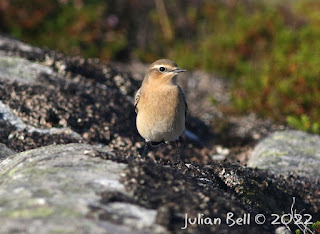 On the way home a Whinchat buskskvett at Tjeldstø was the best sighting.

The following day was another house-bound day but I still managed to notch up a Grey Wagtail vintererle, a Greenshank gluttsnipe and a Redshank rødstilk from my terrace.